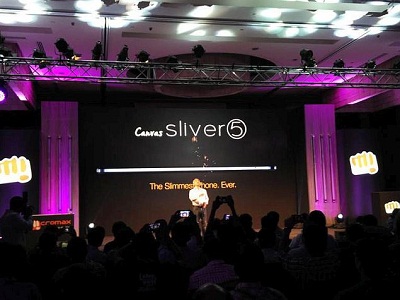 On Thursday, Micromax unveiled a new smartphone called Canvas Silver 5 in India with a price tag of Rs 17,999. The device will be released in the first week of July.

The highlight of this new offering from Micromax is its thin profile measuring only 5.1 mm thickness. The firm claims that the device carries such a thin profile without any bump in between. Notably, the Vivo X5Max, the slimmest smartphone measuring 4.75 mm has a bump on its back for the camera.

The other major highlight of the Micromax Silver 5 is that it supports 4G LTE connectivity as the Canvas Knight 2. Also, the handset is preloaded with Airtel’s Double 4G Data offer that increases the 4G data plan by two folds to the customers. The firm has launched its new service policy called ‘M! On-site Care’ for the Canvas Silver 5. Under this service policy, the firm will provide doorstep pickup and drop in seven days.

When it comes to specifications, the Micromax Canvas Silver 5 runs on Android 5.0.2 Lollipop and boasts of a 4.8 inch HD 720p AMOLED display with Corning Gorilla Glass 3 protection. Under its hood, the device employs a 64 bit 1.2 GHz quad core Snapdragon 410 processor teamed up with 2 GB of RAM.

The Micromax smartphone bundles 16 GB of native storage space that cannot be further expanded as there is no micro SD card slot onboard. The Canvas Silver 5 features an 8 MP main snapper at its back with auto focus and Sony IMX219 CMOS sensor with blue glass filter and LED flash. Up front, there is a 5 MP selfie snapper for video conferencing. A 2,000 mAh battery powers the smartphone and it is touted to render an enhanced battery backup.