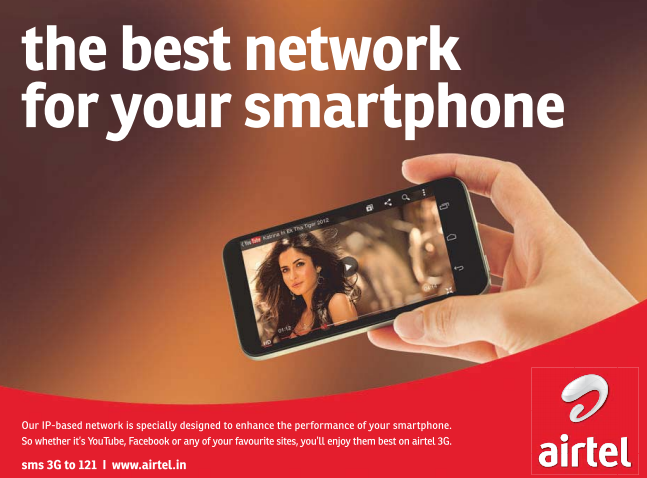 August 2, 2014: Airtel which had earlier carried out successful campaigns like ‘Express Yourself’ and ‘Har Friend Zaroori Hai, Yaar’ has come out with a new campaign positioning itself as ‘The Smartphone Network’. Airtel which claims that enabling magical relationships have always been at the very core of Airtel’s brand values has come out with a new commercial featuring a lady and a man where the lady happens to be the boss of the man and in the end it is shown that the lady who is the boss in the office is in fact the wife of the guy who has been assigned a work in the office.

Mohit Beotra, chief brand officer, Bharti Airtel India, was quoted as saying about the new campaign “This all new campaign by brand Airtel rides on the surge in adoption of data services led by increasing penetration of smartphones across India. Data is clearly driving the next phase of telecom revolution across the globe.” He added, “In recognition of this phenomenon, we at Airtel have made significant technology and network investments to ensure we deliver the best data experience for smartphone users in India. ‘The Smartphone Network’ campaign by Airtel drives this very message in a manner that is intrinsic with our brand positioning.”

The campaign conceptualised by Taproot India will be seen across digital, OOH and retail media. The film which opens in an office and shows a conversation between a female boss and her colleagues ends with a voice over “Kabhi kabhi bas ek smartphone life main thoda magic laa saktha hai. Tabhi to khaas smartphones ke liye bana hai, Airtel – The Smartphone Network.

The new ad has now become one of the most discussed ads with some experts feeling that this film highlights gender stereotypes since it shows the female boss who incidentally happens to be the wife of the colleague to whom she passes instructions for the work to be completed is shown cooking and taking care of the home. The experts feel that this ad is encouraging gender stereotypes.

Airtel has also rolled out a new design element, created by Wolf Ollins also along with the campaign.

Author - January 19, 2022
0
Since the beginning of the pandemic, OTT platforms in the region have gained a large audience. In 2022, these platforms will grow...