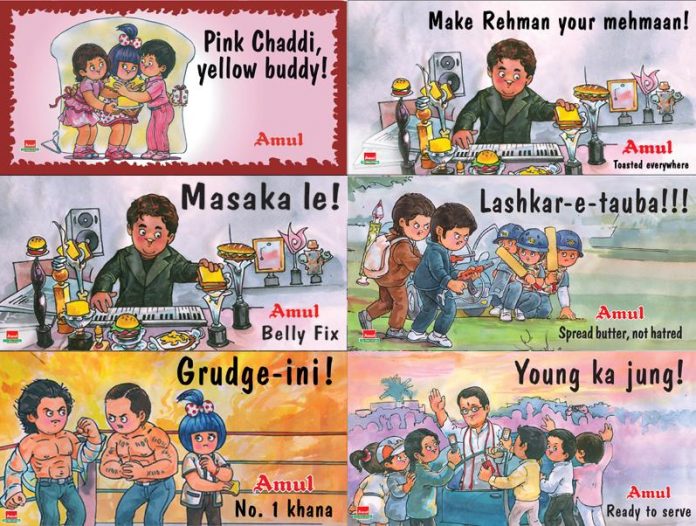 Amul – a household name in consumer dairy products has been a consistent performer way in both rural and the urban markets. A major chunk of the credit goes to the sweet Amul Baby girl who has been adored by the Indian public for years. All thanks to the Amul ads portraying spoofs of current day affairs.

Don’t you just love when Amul keeps doing their ad trick again and again addressing current affairs! To be more specific, their hoardings or sometimes prints, featuring their star – the Amul Baby Girl cleverly display their view on certain current affairs! The Guinness world record holder for the longest ad campaign still tickles your funny bone every time you come across one.

What started off as a 1966 affair with between Amul and Sylvester daCunha’s ad agency has blossomed over the years winning laurels and hearts of the Indian Public. From SRK’s six pack to the iPhone launch and from the Finance Budget to terrorism and in many more talked about areas, the Amul Baby has had her presence mocking the current state of affairs!

Some of the much talked about campaigns in recent times include, Dont Hungry Me campaign, a mock of the Bollywood movie Rowdy Rathore. Then is a creative around the recent SRK fiasco at the IPL titles NA. One is allowed! These guys spare no one and they just keep getting better and better, as if the previous ad set a high benchmark and the next one has to go a level up!

Well, the positioning of Amul (especially butter on a slice of bread in these ads) is in the catch phrase mentioned in these hoardings or prints. Some of it are “In your Budget”, “Eaten by We the People”, “Fair and Tasty” or even “Never Adulterated”. These communicate the image of Amul as something, Truly Indian, Value for Money, Range of Superior Products, Yummy stuffs, which I feel is one of the best and most consistent ways of keeping thier brand alive!

The revenues of Amul stand at $ 2.15 Bn and the impact of the Amul Baby Ads on these numbers is certainly worth emulating for any consumer goods company. The vibe it has created among the Indian consumers is hard to compare. Only time will tell about what’s under the hat, but be rest assured, they will not disappoint you!