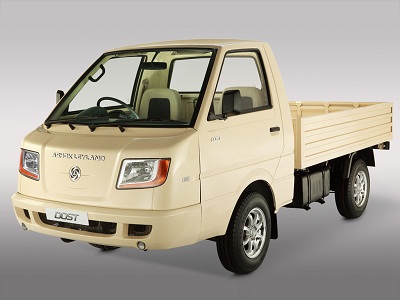 On Tuesday, Hinduja Group’s flagship firm Ashok Leyland DOST sales surpasses 1 lakh unit , its small commercial vehicle. The DOST is the first product that has crossed the one lakh sales milestone among the rest that were launched under the joint venture with Nissan Motor Company.

Regarding the same, Vinod K Dasari, the Managing Director of Ashok Leyland stated that DOST fulfills a significant gap in the portfolio of the manufacturer and the sales of 100,000 DOST vehicles on road in around 11 countries is an evidence that the vehicle has solid engineering, good product design and a strong market acceptance.

As a part of the sales figure of one lakh DOST units, Ashok Leyland is planning to launch a new DOST High Slide Deck variant of the small commercial offering. This variant is aimed to help the customers receive the benefit of a higher loan amount and a company that is fitted ready to use vehicle.

Back in 2008, Ashok Leyland signed a joint venture with Nissan Motor Company that has its headquarters in Japan. Apart from the DOST, the joint venture has launched a slew of products into the markets.

Regarding the same, Nitin Seth, the President of Ashok Leyland’s Light Commercial Vehicle Unit stated that DOST has fulfilled its assurance of increasing payload, class leading performance, improved fuel efficiency, safety and comfort. The vehicle can be experienced by the potential buyers at over 350 exclusive and modern outlets all over the country.

Notably, in less than four years of its introduction, DOST has emerged as the second largest brand in the small commercial vehicle segment in India and other markets such as Nepal, Sri Lanka, Myanmar, South Africa, Bangladesh, Kenya, UAE, Malawi, Male, Mozambique and Tanzania.

Experts claim that this year is expected to be a flat and that the LCV segment will pick up in the next year. Already, the segment is exhibiting some launch activity like the rollout of the Mahindra Jeeto.

Passionate In Marketing - August 13, 2020
0
Amritsar based eBike start-up, by Irfan Khan, eBikeGO on Tuesday said it has roped in Harbhajan Singh, the Indian Bowler as it's...