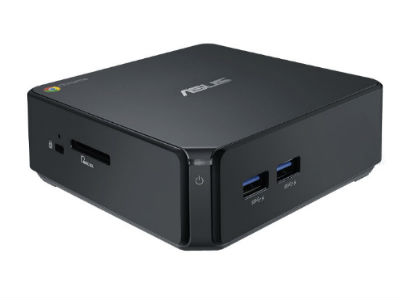 August 7, 2014: Asus has announced three variants of the Chromebox CN60 in India on Wednesday with prices starting from Rs 21,000. These compact devices are based on Chrome OS and can be used along with any TV or monitor. Users can choose the processor between Intel Celeron, Core i3 or Core i7.

The Core based variants support 4K video recording, while the Core i7 model can be used in office environments to handle the video conferences supporting up to 20 participants. All the three models support the Google suite of applications that will constantly receive automatic updates.

The Chrome OS is claimed to arrive with integrated virus protection and is capable of booting up within seconds. The users of Asus Chromebox CN60 will receive 100 GB ofGoogle Drivespace for two years. Also, users can sync their content such as passwords, files, browser sessions and others across Chrome OS and Chrome browsers on Android, iOS, Windows and OS X platforms.

The Asus Chromebox CN60 employs low-power fourth generation Intel Haswell processor with integrated Intel HD graphics support. The cheapest model of the trio will be based on Intel Celern 2955U paired with 2 GB of RAM and will cost Rs 21,000. The next in the lineup is based on Core i3 and features 4 GB of RAM for a price tag of Rs 36,500. The top-tier variant employs Core i7 teamed up with 4 GB of RAM and will retail at Rs 58,000.

Asus provides wired or wireless keyboard and mouse packages that is optional. The other accessories for these models include HD webcame, microphone/speaker unit and remote control.

Commenting on the launch, Vinay Shetty – Country Head – Component Business, ASUS (India) said, “We’re excited to launch the Chromebox inIndia. There’s been an increase in demand for small form factor mini PCs / HTPCs and the Chromebox would be a great alternative for such applications. With Intel’s latest Haswell processors and 4K ultra high definition video playback and running Google’s Chrome OS, the Chromebox is a great new device for customers looking for a mini PC.”

Also, Amit Gupta, Director, Business Development, Intel South Asia, said, “Intel is proud to power the ASUS Chromebox that promises an efficient multitasking performance in the Chrome OS. The personal computing ecosystem continues to evolve rapidly and Intel will continue to innovate in order to power and foster this evolution.”

Passionate In Marketing - February 21, 2013
0
Feb 21, 2013: Disney Channel will be bringing one of the well known shows of the world Mastermind Quiz to India. The Quiz Show...

Emami for more acquisitions of brands both within and outside the...