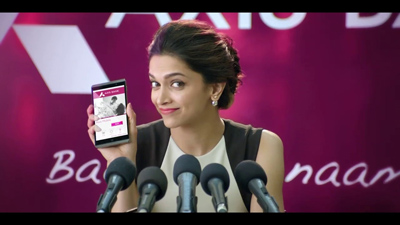 June 7, 2014: Axis Bank announced the third phase of its advertising campaign around the theme ‘Badhti ka naam zindagi’ with its new brand ambassador Deepika Paudukone. The teaser of the new advertisement conceptualised by Lowe Lintas and Partners gives a sneak peak into the ad film which will be released on June 14th. The TVC featuring Deepika Paudukone who has been on a success spree with all the last 3 films of hers crossing the Rs 100 crore mark at the box office ends with a message ‘To be continued’.

Rajiv Anand, President, Retail Banking, Axis Bank, was quoted as saying about the new campaign, “The new film takes our brand positioning of Badhti ka naam zindagi ahead. The campaign is based on the insight that Progress means different things to different people and can also be defined differently for the same individual at different times. This insight is captured in our new communication which brings to life the ubiquitous and multidimensional nature of progress.”

The new ad film of Axis Bank directed by Gauri Shinde opens at a press conference where a group of journalists are waiting. Deepika walks into the room and points to a particular reported to ask a question. The reporter asks Padukone about her association with Axis Bank and she says she is progressing life and looks at her backdrop and mentions the tag line give there ‘Badhti ka naam zindagi”.

Badhti ka naam zindagi basically means Progress and the new TVC tries to capture the essence of brand Axis. The ad tries to connect personally and emotionally and stresses on the point that it is also important to have a value system in place.

Atomberg launches “Why not” campaign