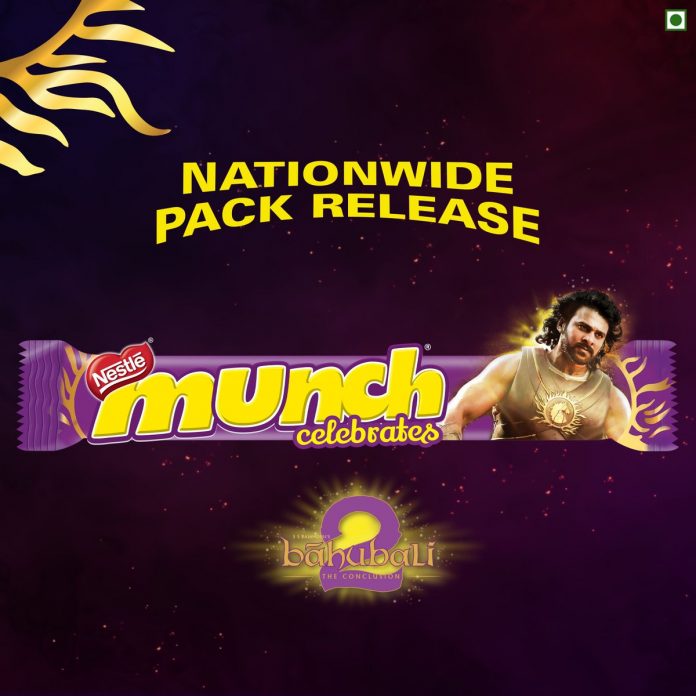 Baahubali 2: The Conclusion is breaking records even before its release. The makers of Baahubali 2 have already announced that they will be re releasing Baabhubali, the first installment of the series in 900 theatres which is unheard of in the history of Indian Cinema. This will be done a week prior to the release of Baahubali 2. The excitement around Baahubali 2 is slowly building up and its trailer has become the seventh most watched online video on YouTube which 24 hours of its launch. The trailer of Baahubali 2: The Conclusion has already crossed 100 million views on YouTube.

As the hype is building up and the makers are going to release the move in 6,500 screens across the country on April 28, Baahubali 2: The Conclusion marketing has reached its peak with deals worth over Rs.500 crore. The makers have tied up with a dozen commercial brands for Baahubali 2. The strategic tie up includes commercial association with Nestle and Britannia. They have also signed a deal with a mobile phone brand, the announcement of which is expected to be made public in the coming weeks.

Team Baahubali has tied up with Fueladrea, a crowdfunding platform which will allow fans who want to fund a charity to do so by contributing money. This money will be used to save lives of those children who have got life threatening ailments. The donors will get T-Shirts autographed by Prabhas and Rana. They will also be getting other unique rewards.

According to Shobu Yarlagadda, producer of Baahubali 2: The Conclusion, “ Baahubali had become a brand now, it was decided to capitalise on it, both commercially and socially.”  He added, “Nestlé is expected to bring out a special packaging for Baahubali 2. The partnership will be activated through the launch of five new Munch limited edition packs and a high-decibel television campaign, supported by exclusive social media content.” Before the release of Baahubali 2 the makers have signed deals worth over Rs.500 crore mainly for the sale of its theatrical and satellite right. With this the second installment will be much bigger than the first one.

Passionate In Marketing - February 11, 2013
0
Feb 11, 2013: Facebook has recently announced a statistics which says that it has 1.06 billion monthly active users across the world. The number...

Tag Heuer to Looks to Enrich Consumer Experience in India