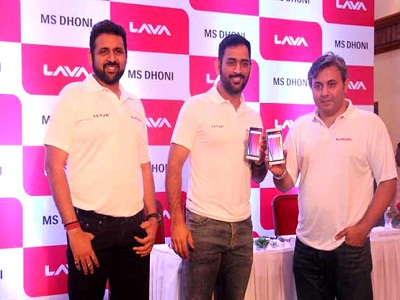 Lava Mobile has come up with a series of three commercials that feature Mahendra Singh Dhoni, an Indian cricketer and Prateik Babbar, a Bollywood actor. Soho Square conceptualized these ads and the same will be aired during the IPL season and comedian Kapil Sharma’s new show on a Hindi GEC. After the same, the ad films will promote the brand on social channels.

Of the three ad films, one is on air currently and it shows the mockery between the two showcasing the test that the Lava mobile phones undergo.

In the film, Babbar plays the role of a Lava representative along with Dhoni in the locker room. The latter asks Babbar why he must promote the brand. For this, Babbar says that the phones from Lava pass thousands of tests. When he is asked to prove, Babbar asks Dhoni to check it himself and he throws the device across. Intentionally, Dhoni drops it and says that it was by mistake. He picks it up and asks if it is broken. Babbar responds in negative and claims that they have carried a drop test as well. The voice over that follows details the tests that the phone has undergone. When Dhoni asks about a specific test that they failed to do, Babbar says it is the catching skills of Dhoni that remains untested.

Solomon Wheeler, the VP and Head of Lava International’s marketing and communications stated that they operate in the sub Rs 12,000 price range. They wanted to be a differentiator in this segment as the other aspects will be duplicated in a few months by other Android sellers. This segment is looking for value. Dip Sengupta, the SVP and head of advertising of Soho Square stated that the reliability and safety are great to start with. Lava undergoes due diligence and testing in order to bring the models that are highly reliable. They have tests meant to check all the features. This way, there is a smartphone that will not die on you.

Passionate In Marketing - December 4, 2014
0
Discovery Network Asia Pacific has launched the first Indian channel aimed at men. It is basically a re-branding of the current Discovery Turbo channel...

FDI in Retail – Why it could prove a threat to...

Do you focus on second and third type of customers?

Pepsi comes out with a new bottle shape for the first...

27 Greatest Consumer Brands in the World unveiled by Citi Research