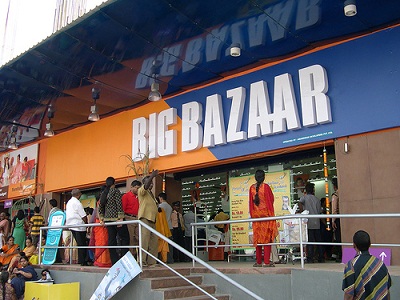 This partnership is expected to further expand to the Future Group’s other physical retail store networks including electronic goods network eZone and home improvement chain Home Town, claim the people familiar with the plan.

Big Bazaar has already imitated this pilot project in some of its stores in three cities such as Delhi NCR and Mumbai. It is also in plans to expand this mobile payment service across the nation within a period of three to six months, claimed those known about the development.

This partnership with Big Bazaar is the second such initiative for Mobikwik as the firm already tied up with WHSmith, a firm that operates book and grocery stores at metro stations, airports and other places and Café Coffee Day outlets for the digital wallet payment. The digital payment at WHSmith is still not live.

The initiative taken by Big Bazaar will be similar to that of Starbucks’ mobile application that is the most widely used digital payment inU.S.at present. Till date, this service has been restricted only to e-commerce firms, but now digital payment is finding many takers, especially among the traditional retailers. Those familiar with the plans of Big Bazaar and Mobikwik claimed that the service will not be limited to smartphones as the feature phone users can also use the digital payments.

The customers of Big Bazaar have to quote their mobile number at the payment counters that is registered with Mobikwik wallet. They will receive a text message with an OTP (one time password) that can be used for a specific transaction. The next step is to share the OTP with the executive at the payment counter so that the person enters the code in the retaiilers’ system to deduct the required amount from the Mobikwik wallet of the customer. The upper limit for these transactions is Rs 50,000 and there is no lower limit.

Passionate In Marketing - June 2, 2014
0
June 6, 2014: In a bid to help mobile operators engage more with subscribers and to enhance their service experience, mCarbon Tech Innovation, a...

Babbar, Dhoni do a ‘Drop Test’ for Lava Mobile

Blogging Tips: Turn your Blog into a Money Churning Venture

Coca-Cola’s Kinley and Bonaqua brands will compete each other