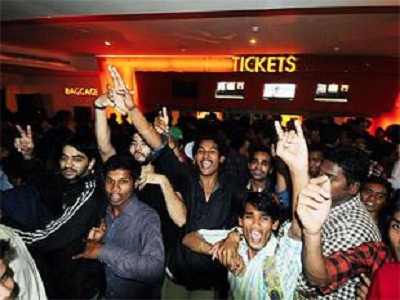 At PVR’s luxury venue Director’s Cut at Delhi’s Ambience Mall, the price per ticket for the latest Rajkumar Hirani film, PK is Rs 1,600. This is a solid 60 percent hike from the usual price of Rs 1,000. At the other theatres, the ticket prices have increased between 10 percent and 50 percent.

The price hike is not new as it has been executed for all the blockbusters that were released this year including the Shah Rukh Khan starrer Happy New Year, Salman Khan starrer Kick and Hrithik Roshan starrer Bang Bang. Furthermore, 60 percent of the first week collection revenues are given to the distributors as a share.

Regarding this, Gautam Dutta, CEO at PVR claimed that this is called blockbuster pricing and it is a strategy followed for the big films released in the holiday season. Also, Amrita Pandey, VP and Head of Marketing & Distribution, Studios DisneyIndiathe Distributors said that PK has been released after meticulously mapping the locations across the country by assessing theatrical potentials of the centers individually.

The ticket pricing is usually claimed by the distributor to ensure that a higher share comes to him and this is conveyed to the theatre well in advance. As per the law, theatres have to send a notice to the collector communicating the hike in the ticket prices to the official.

In the case of PK, the old single theater inCentralPlaza, South Mumbai hiked its prices by 50 percent and Paradise inCentral Mumbaiincreased the ticket prices by 10 percent. Both the centers witnessed over 95 percent occupancy despite the increase in their pricing. The only theater owner who refused to carry out the move was Manoj Desai of G7 Multiplex, Gaiety and Galaxy. He claimed that the prices of their tickets have always been between Rs 80 and Rs 100 for all the movies.

Usually, the second week prices will be low and single theatre owners will have to adhere to the first week pricing as blockbusters bring in crowds.

Passionate In Marketing - November 30, 2015
0
The millions of mobile phone users in India are aware of the silent war that is developing as a high stake tussle is expected...

Partnership of Snapdeal and Tata Capital to finance up to Rs...

Google works on driverless cars with no brakes or steering wheel:...

Apple iOS takes over Android in US