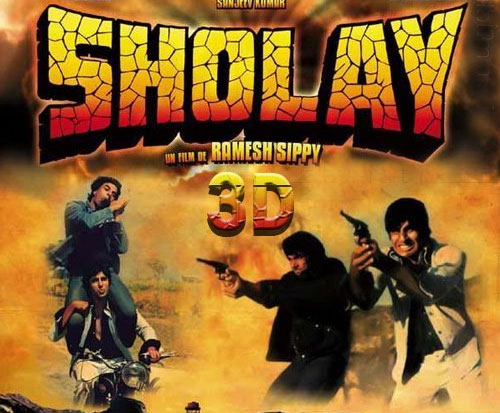 January 7, 2014: Probably there might be very less number of people in India who would not have watched the movie Sholay. Sholay directed by Ramesh Sippy which was released first in 1975 achieved the status of cult classic over the years. Four decades after its release, Sholay has been released again in the 3D format and still it is pulling crowds. Sholay 3D has already raked in Rs. 6 crores in its opening weekend which is really a very good feat considering the types of movies that are being made and released nowadays. The movie which has been re released in 850 cinema halls in both 3D and 2D formats continues to make the crowd go frenzy.

The producers Sasha and Jayantilal Gada who have released Sholay 3D have already recovered the marketing cost in the first weekend itself. They are trying to recover 25 per cent from the box office and rest from satellite rights and overseas market. The movie about two small time law breakers who take on a terrifying bandit has a lot of records attached to it. There was a time when in some theatres it ran for six years and in some for two years every show of 1,400 seats were housefull. Instances have been reported where black marketers who used to sell the tickets in black of Sholay bought taxis and flats with the help of the proceeds.

Passionate In Marketing - September 21, 2020
0
The first online shopping channel of Apple will be launched in India on September 23rd and the launch will be broadcasted live....