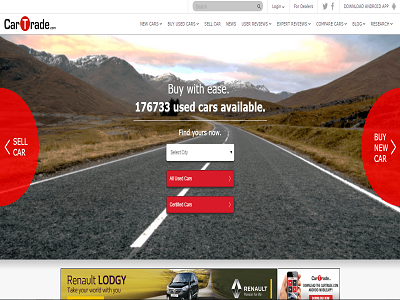 CarTrade, the internet based automobile classifieds company is all set to acquire its rival company CarWale Group for a deal of $120 million. The final round of acquisition related discussion is going on, claimed a person familiar with the matter.

The source claimed that the acquisition is almost final and CarTrade is claimed to make an official announcement in a couple of weeks. This deal includes both CarWale and BikeWale.

The other portal, Cardekho that is backed by Ratan Tata was also in the fray of buying CarWale, and it came with a bid of $100 million, claim the sources. The promoter of CarTrade, Vinay Sanghi did not comment anything confirming this development.

If the acquisition is finalized, then CarTrade will be the second major consolidation in the arena of automobile classifieds. The leader in this segment is Cardekho that acquired Zigwheels. The latter is an online automobile portal that was owned by Times Internet. The acquisition of Zigwheels by Cardekho was done in July for an undisclosed amount.

One of the major digital publishing houses, Axel Springer backed CarWale owning a majority stake in the company. On the other hnad, CarWale’s founder, Mohit Dubey has less than 10 percent stake. After the acquisition, Dubey will have 2 percent stake in both the entities jointly.

A consortium of investors such as Goldman Sachs, Tiger Global and JP Morgan has been formed to finance the acquisition of CarWale. There are industry experts who consider that the value of this deal is too high.

Back in February, CarTrade raised a funding of undisclosed amount from the former founding CEO of Auto Trader. This is the largest auto classifieds organization in the Unite States. Last year, CarTrade raised a fund of Rs 185 crore from Warcus Pincus and its existing investors such as Tiger Global and Canaan Partners. S

Passionate In Marketing - June 28, 2020
0
The Coronavirus pandemic has radically affected business in the food delivery sector, and the ways to recovery seem long and winding. Considering...