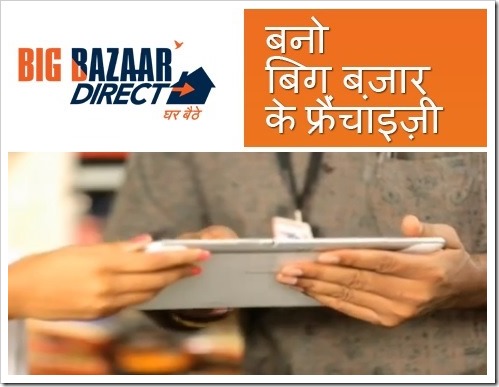 Big Bazaar which is worth Rs.11,000 crore has been a name to reckon with in the retail business recently had its own share of ups and downs. The brand which has been on the defence since the last 18 months is back to what it is best at i.e. to be on the offensive. Kishore Biyani, CEO, Future Group has come up with an idea which was tried by his elder daughter Ashni Biyani five years ago.

Big Bazaar which was selling pieces of its debt laden retail empire till recently is looking for a turnaround with a new distribution model ‘Big Bazaar Direct’. It all started when Ashni Biyani set up a 600 sq ft store in Mumbra in Maharashtra and named it Big Bazaar Best Deals offering services through a catalogue by using online retail. Though the idea did not take off but the spin off such an idea was how Big Bazaar Direct was born.

Speaking on the occasion of the launch of Big Bazaar Direct last month, Kishore Biyani was quoted as saying “If it works, it will be bigger than Big Bazaar” and he further added that “I am confident about this one.” He went on to say that, “We are venturing into this after making most of the mistakes in the world.”

Big Bazaar Direct is the first of its kind experiment in retailing and if it really clicks off, this would be a game changer not only for the Future Group but also other players in retail space.

BBD invites people as franchises and anybody from a shopkeeper to a home maker can become a franchisee by paying a deposit of Rs.3 lakhs. Once a person gives an application to take a franchisee of BBD, the application is screened by a group of five entrepreneurs who will decide whether the applicant is qualified enough to take up the franchise. According to Abhay Kumar, who happens to be a Enterpreneur and has been doing business with Kishore Biyani for 27 years and is part of the group of five, “The biggest criteria we are seeking in our franchisees is entrepreneurship, their ability to collect customers.” The group of five is targeting nearly 4,600 prospective franchisees for interaction in the month of October alone.

One the franchisee is identified and allocated an area, he/she would go to nearby homes and collect orders through a tablet pc and takes cash. The order is transferred via internet to Big Bazaar and the moment it is done an SMS is send to the customer confirming the same. Big Bazaar would be delivering all these goods to customer’s home in next 3 to 7 days. Ashni Biyani terms this new format as ‘aided e-commerce’ and she adds that “We have realised that, even today in India, human intervention is required in e-commerce.”. This is where Big Bazaar is trying to pitch in with its product offerings and offers.

The franchisees for all their efforts would be earning a handsome commission for the sales that is generated.

Big Bazaar which touches nearly 35-50 per cent of the Indian population with the new BBD format is looking to touch 70 per cent of the population. Though this concept would be creating a new breed of entrepreneurs and will be taking the Big Bazaar brand closer to the people, it has its own share of challenges. One of the major challenges would be BBD will be offering 1800 products whereas Big Bazaar typically carries 30,000 to 40,000 products. On one side Big Bazaar would be able to leverage on the contacts of the local entrepreneurs without looking for additional working capital but the other aspect is the time taken for delivering the products.  This is just the tip of the iceberg and as BBD starts expanding, it would be facing many more challenges in the future.

BBD has now been launched in Nagpur and Amravati in Maharashtra by signing 15 franchisees and plans are to expand into Mumbai, Hyderabad, Ahmedabad and National Capital Region.