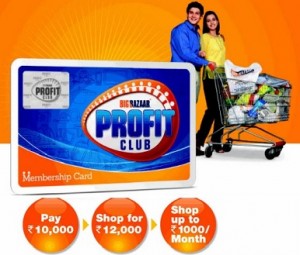 which is one of the pet ideas of Kishore Biyani is one of the make or break ideas for Big Bazaar which is reeling under debt of Rs.2500 crore as on 31st December 2012.

Future Group owned by Kishore Biyani have been facing severe financial uncertainties in the recent past and its total debt was Rs.7,800 crore in 2011. The profits they were making is being utilised to service the interest of the debt and so that leaves Future Group with poor working capital. Biyani has been since then trying to turn around the fortunes for Future Group by selling majority stake in Pantaloon Retail to Aditya Birla Nuvo and stake in Future Capital to Warburg Pincus for Rs.560 crore. The other restructuring mechanisms evolved by Future Group includes selling its stake in life and general insurance and creating a new entity Future Lifestyle Fashion and shifting its debt of Rs.1,200 crore to the new company.

Big Bazaar has now launched its new promotion scheme ‘Big Bazaar Profit Club’ with much hype and hoopla and this one of the first attempts by a mainstream retailer to make the customers buy more from them. This scheme allows a customer to pay Rs.10,000 upfront and after joining this club they can shop for Rs.1,000 a month for 12 months. The catch here is they can buy for 20 per cent extra. Though this has been tried by jewellery retailers, this is the first time that a mainstream retailer is coming out with such a promotional campaign.  Though this scheme is slowly picking up it has actually resulted in some experts raising eyebrows.

Some in the industry believe that this a strategy by Big Bazaar to improve its cash flows which saw negative cash flows of Rs.4.92 crores for 18 months ended 31st Dec 2012. With this campaign, the retailer would be able to lock in customers for next 12 months and this will help the company to improve its sales for next three or four quarters. It is reported that already 20,000 customers have become members of the Big Bazaar Profit Club which has resulted in Big Bazaar netting Rs.20 crore in advance.

But all does not seem so rosy for Big Bazaar. There are some who believe that this scheme will not have much impact on the balance sheet of the company because the sheer size of balance sheet is so high that even if 200,000 customers sign in for this program the company’s finances will be miniscule. Even if there is 10 times increase in the enrolment that will only mean Rs.200 crore in the kitty of Big Bazaar which is too miniscule looking into the debt size which stands at Rs.2,500 crore.

Whatever be the stand of the experts, one silver lining in this whole promotion exercise is that Big Bazaar have better bargaining power with the suppliers and help them meet the working capital needs better as there will be increase in the sales. It is for sure that the company would be able to increase their market share and sales volume with this scheme.

Will this be enough for Kishor Biyani to restructure Future Group is something which can be argued on, but this promotion scheme which is something unheard of in mainstream retailing is surely going to attract more retailers to the bandwagon in future. What would happen to Big Bazaar if more retailers come up with this offer? Will the retail giant be able to attract more people to this scheme? Probably, these would be some of the questions that are arising in the minds of Kishor Biyani and other executives at Big Bazaar.