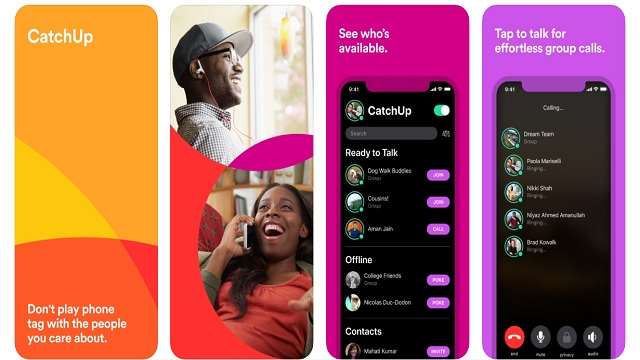 Facebook has launched a new group calling app called CatchUp, which allows users to engage in group calling with up to 8 members.

Group calling apps are not something new, with hundreds and thousands of group calling apps available for mobile devices at this time. But social networking giant Facebook has come up with a new group calling app called CatchUp. The app has been developed by Facebook’s internal R&D group, NPE team (New Product Experimentation) and is being tested in the United States for a limited time on iOS and Android operating systems. NPE apps are subject to changes as they are new product experiments.

So what makes CatchUp app unique?

Facebook already have a number of platforms that provide group calling facility like Whatsapp, Messenger Rooms, etc. The unique feature of this app, when compared to the other Facebook-owned group calling platforms, is that CatchUp allows its users to know when other users or their contacts are available to talk. As per Nikki Shah, product lead, “Based on our studies, we found that one of the main reasons people don’t call friends and family more frequently is that they don’t know when they are available to talk or are worried they may reach them at an inconvenient time. CatchUp addresses this problem, and even makes group calling as easy as one tap.”

Besides that, CatchUp enables audio calls only, video calls are not possible with this new app. In addition to that, this app works with the user’s contacts list and does not require a Facebook account to use the service. The app is very similar to an app called Houseparty which also allows users to know who’s live at the moment, by sending out notifications when user’s contacts open the app and flagging them as here in the app’s interface. The app also includes privacy features that allow you to configure which contact can join for 1-on-1 and group calls. Users can also create and join groups of family, friends, and mutual contacts with this app.

Although video calling platforms are on the rise, Facebook avoided the video call feature for Catchup, explaining that an audio call is often more convenient as users are not video-ready always or they may have to multitask. Facebook also pointed out that the idea for the app actually came before the Covid-19 outbreak, but the NPE Team accelerated the app’s development in view of the pandemic.

Passionate In Marketing - July 4, 2020
0
In the wake of having tricked clients with its 2 minutes' instant noodles, Nestlé extended its ready-to-eat food portfolio with the launch...

“We set a tripod on a towel and dragged it for...