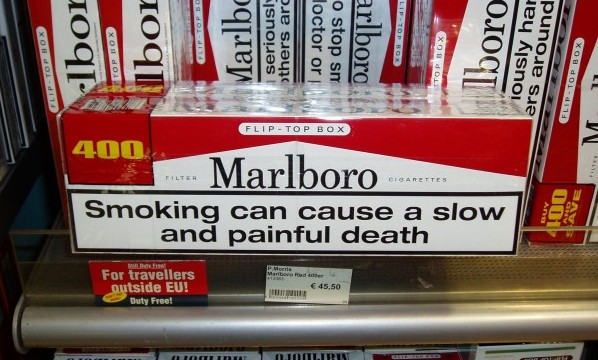 July 11, 2014: Though the government has been trying their bit to address the issue of smoking and putting in new laws and increasing taxes the success of the campaigns is debatable. A lot has been said about the effectiveness of putting warning labels on Cigarettes and thereby discouraging people to smoke and a section of people believe that displaying labels influence smokers to quit. A new study comes as a shot in the arm of the people behind this campaign. According to a new study which was published in the American Psychological Association journal Health Psychology it was reported that cigarette warning labels can influence smokers to try to quit. The study further reports that the labels can influence the smokers to quit even when they are trying to avoid seeing the labels.

This study which was done in four countries involving thousands of adult smokers found that small, text only warning labels like what are put on cigarette packs prompt people to think about the health risks associated with smoking and if they are continuously exposed to it they might quit smoking. Larger graphic warning labels like those which are used in countries like India and Australia would help garner people’s attention more and influence them to attempt quitting. Researchers as part of this study conducted telephone surveys of over 5,000 smokers in the US, Australia, Canada and the UK from 2007 to 2009. They were later followed up one year later.

Participants of this survey smoked an average of 17 cigarettes a day and 37 per cent reported trying to quit at least once at the one-year follow-up. Lead author the study Hua-Hie Yong, of the Cancer Council Victoria in Australia was quoted as saying “Warning labels vary widely from country to country but it’s clear that once people see the labels, the same psychological and emotional processes are involved in making people consider quitting smoking.”

Is this the coming back of radio as a mass media?

Passionate In Marketing - March 19, 2015
0
Bimal Julka, Information and Broadcasting secretary said that the radio can play a major role in creating and spreading awareness about the flagship programs...

Decline in Sales, Godrej Consumer Products not to focus much on...

Mercedes-Benz to Launch 15 Models in India to Outshine Audi

Acquisition of ZipDial By Twitter Sets New Hope for Startups in...