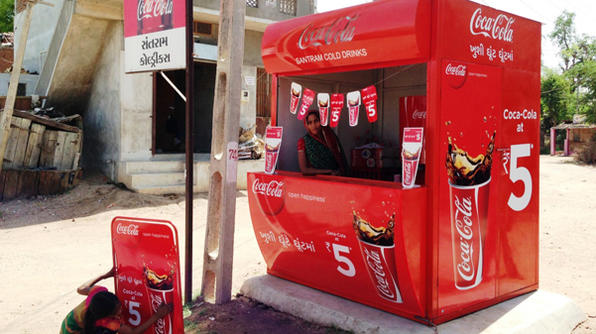 Coca Cola’s growth in India has taken a different route all together. The Indian arm of the world’s largest soft drinks firm announced that it has posted “mid-single digit decline in India” this despite the fact that April-June is the peak season for consumption of soft drinks.. These figures are for year on year in the quarter.  Nearly 40 per cent of annual sales estimated at Rs.14,000 crore comes from this season. Attributing the growth in single digits to slowdown in rural consumption and unseasonal rains, Coca Cola on Wednesday issued a statement that “In India, unseasonable weather during the quarter drove an overall decline in the industry”.

Another reason being cited for the decline in Coca Cola’s growth is the 5 per cent hike in excise duty which resulted in 10-15 per cent hike in the prices. A 200ml Coke bottle now costs Rs 12 instead of Rs 10. According to reports its rival PepsiCo too have posted single digit volumes growth in the country.

Reports suggest that it is not on the Cola market which is hit this year but also consumption across everyday products such as biscuits, soaps, toothpaste and beverages have been hit in the quarter. It has been increasingly observed that  consumers are holding back purchases across categories.

A Crisil report released earlier this month said, “The fragile state of rural consumption is reflected in volume and top line growth of companies heavily dependent on hinterland such as FMCG, tractors, and motorcycles.”

Though Pepsi and Coca Cola have been trying to deseasonalise the cola consumption by marketing it throughout the year, this time they have got limited success.

Arvind Singhal, founder of retail consultancy Technopak  was quoted as saying on the Coca Cola’s growth that “It could also be an indirect effect of the processed food controversy. Secondly, the economic boost that we have all been hoping for hasn’t really taken off and consumers are a bit wary,” said.

This news would shock some industry experts because very recently only  India became the sixth largest market forCoca-Cola by volume sales, overtaking Germany. Coca-Cola India now trails the US, Mexico, China, Brazil and Japan after overtaking 13 global markets since 2006 when it was ranked 19th