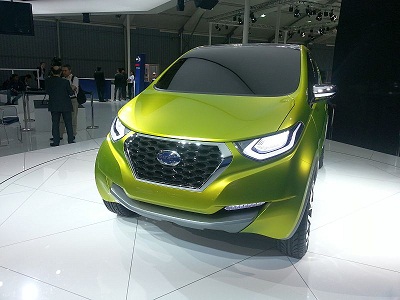 Datsun will be launching a new car in India in the next year. Well, the firm has not officially announced the Redi-Go low cost hatchback as its upcoming product for the Indian customers. However, it is certain that this hatchback coming in 2016 will be the next vehicle from the firm.

Notably, the Datsun Redi-Go was showcased at the Indian Auto Expo 2014 and it was to follow the launch of the Go+ MPV. As the launch of the Go+ MPV is out of its way, the brand is likely to focus more on the upcoming hatchback. It has to be noted that the Redi-Go will be the most affordable car in the range of Datsun vehicles in the country. It is expected to be priced in the range below Rs 3 lakh.

The Redi-Go will arrive with an 800 cc petrol engine and it will have a sibling from Renault. Well, the Kayou hatchback is likely to be unveiled in the country on May 20 and it will be the platform mate of this upcoming Redi-Go from Datsun. Both the vehicles will make use of a CMF-A platform and Renault might provide the Kayou with an option for AMT that can be offered with the low cost Datsun offering coming in the next year. Both these cheap hatchbacks from Datsun and Renault are said to be produced at the production facilitate in Chennai run by Renault and Nissan jointly.

It appears like Datsun is all set to increase its market share in the country as the market is highly competitive in the recent years. The firm is in plans not only to roll out the Redi-Go in 2016, but also to launch several such low cost vehicles in the next two years.

The entry level Datsun Redi-Go with an estimated pricing of sub Rs 3 lakh will definitely go on a stiff competition with the best selling vehicles in the same price bracket such as Hyundai Eon and Maruti Alto 800.