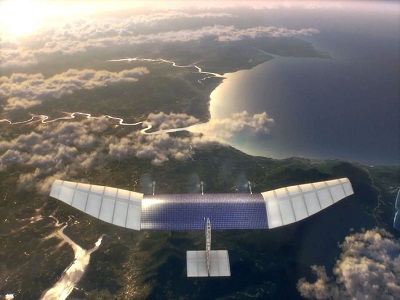 Facebook’s Connectivity Lab is right now prepping solar-powered drones that will be targeted at bringing internet connectivity even to remote locations. In the last month, as a segment of the Internet.org plan, the first test flight was completed successfully in theUnited Kingdom.

It is reportedly claimed thatIndiamight be the first country in the world to receive the Facebook drones that will render broadband connectivity even in the remote locations.

Facebook’s CEO, Mark Zuckerberg proposed a pilot project that will overpass the digital divide. This was proposed at the meeting with Ravi Shankar Prasad, the minister of communications and information technology in the last year.

The interesting aspect is that the Facebook deployed drones will be capable of flying at a height of 60,000 feet to 90,000 feet above the ground level. This is above the commercial jetliners and at this level the drones will not be affected even by weather. The only thing is that they will be invisible. The solar drones will be powered by the sun to provide Wi-Fi coverage continuously. This was revealed by Yael Maguire, Facebook Connectivity Lab’s engineering director.

It is claimed that at such a high altitude a drone can broadcast a powerful signal that can cover a city sized area with a moderate population density. This is said to be the lowest altitude for the unregulated airspace and the atmosphere has a stable weather condition and low speed of wind at this level.

This means that an aircraft can cruise easily and save power while generating the power from the solar panels during the day. The power will be stored in the batteries for use during the night.

It is claimed that aircrafts like these drones will help in connecting the entire world as they can serve 10 percent of the entire global popularity that live in the remote areas without internet infrastructure in an affordable way, stated Zuckerberg. This project is highly aimed to providing affordable internet access to the remote users in the world.

Passionate in Marketing - January 25, 2022
0
Manforce Condoms, one of the largest selling condom brands in India that never misses to leverage a moment on its social media. Audience...