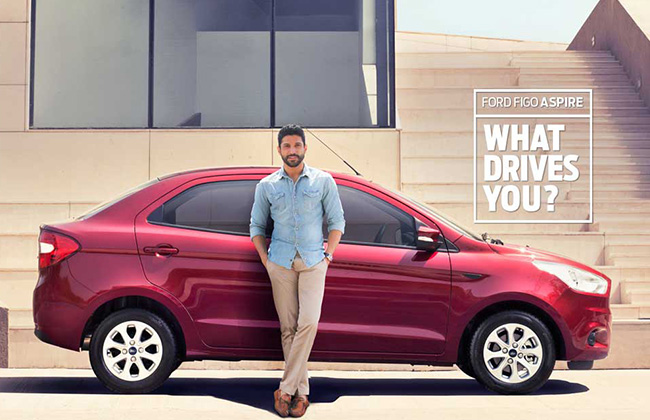 Ford India today launched its much anticipated compact sedan Figo Aspire. Figo Aspire launched by Ford would be available in both petrol and diesel engine options. The original Ford Aspire (available only in America) from the 1990s was essentially a basic car but the new Figo Aspire is loaded with host of features.

Speaking on the occasion of launch of Figo Aspire, Ford India President and Managing Director Nigel Harris was quoted as saying, “The year 2015 is the year of next stage of growth for Ford in India. We plan to launch three new products in next six months starting with the Figo Aspire today.” He added that Ford Figo Aspire has been developed keeping into mind the requirements of Indian customers.

The diesel option of Figo Aspire has 1.5 litre engine and is priced between Rs.5.9 lakh and Rs.8.24 lakh whereas the petrol option which is powered by 1.2 litre and 1.5 litre engines will be available at a price of Rs 4.90 lakh and Rs 7.80 lakh

The compact sedan segment of late has been witnessing a fierce competition with nearly 30,000-35,000 cars each month. The compact sedan car segment has got 45 per cent in India’s auto market and nearly 1.1 million vehicles were sold in 2014, compact cars’ share was 45 per cent in India’s auto market in 2014. The company is expecting the segment to grow to around 1.6 million units by 2018 and would be launching the new Ford Figo hatchback and SUV Endeavour in the coming months.

Xiaomi to launch Mi 4 phone in India by the year...

Passionate In Marketing - August 28, 2014
0
August 28, 2014: Chinese handset manufacturer Xiaomi who recently announced that they will no more be selling the Mi 3 phones in India which...