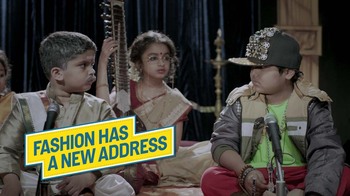 May 6, 2013: E-Commerce portal Flipkart.com which launched its new teasers on television and social media starting 23rd April has unveiled its new TVC. Three new TVC’s have started appearing on various television channels communicating that ‘Fashion has a new address’. Before the new TVC was launched, Flipkart also conducted a contest on Facebook in which they announced from an anonymous page asking people to guess which brand is getting advertised. Prizes were given to the participants who gave right answers.

The new TVC continues with the ‘kids as adults’ theme and has been created by Happy Creative Services. About using kids as adults theme for the new TVC, Ankit Nagori, Vice President, Retail (lifestyle), Flipkart.com said that, “Flipkart as a brand has built a strong association with kids in its earlier campaigns. We wanted to take that idea and its familiarity forward to get our customers comfortable with the idea of shopping for lifestyle products on Flipkart.” All the three new TVC’s ends with voice over announcement that clothing, watches footwear etc. are now available on Flipkart.com. Through this Flipkart which made its foray in lifestyle and fashion category is trying to break the clutter in the space where there are many competitors.

On this new campaign, Ravi Vora, Senior Vice President, marketing, Flipkart.com was quoted as saying that, “Flipkart is the largest e-commerce platform in the country today. While we have already established our leadership in categories like books and consumer electronics, we are aware that we are a late entrant in the fashion and lifestyle space. Our aim is to build a leadership position in this category as well.”

The use of ‘kids as adults’ has quite successfully being used by Flipkart earlier and this new TVC for promoting Flipkart as a e-commerce destination for fashion and lifestyle is surely going to make some impact for the company. Though there is sufficient space in this category, it remains to be seen if Flipkart is able to establish a leadership position as it did with categories likes books and consumer electronics.

Passionate In Marketing - July 31, 2020
0
On the occasion of Raksha Bandhan, the Man Company has come up with a heart-warming advertisement starring Ayushmann Khurrana. The company has...