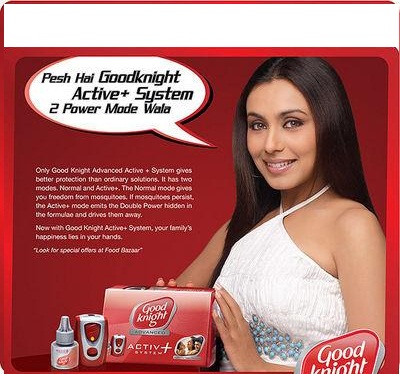 March 16, 2013: Goodknight which is owned by Godrej Consumer Products is the market leader in the insecticides market in India and after achieving a robust growth in southern and western markets, now the promoting company is planning to build up its distribution in the northern markets. The company which lacks leadership position in certain pockets in northern India has also seen lack of growth in this region because of prolonged winter. In southern and western states the climate has turned hot and in turn increasing the demand for Goodknight.

Goodknight has been facing a stiff competition from its competitor All Out promoted by SC Johnson especially in states like Delhi, Haryana, Uttar Pradesh and Punjab. All Out has a better market share than Goodknight in these states. Godrej Consumer Products which has another insecticide brand Hit is trying to expand both Goodknight and Hit to underleveraged segments in the house hold insecticide category. They are trying to expand into these segments with new formats. Hit is positioned for non mosquito category and whereas Goodknight is positioned for the mosquito segment.

Though the insecticide market in India has been growing between 12 and 15 per cent and is valued at Rs.3,500 crore, the growth has been slower last winter for Goodknight in certain regions where it fell to even single digits. The company is trying to expand its base and also looking to come out with new products for the rural markets. The other brands which Godrej Consumer Products owns are Jet and Banish.