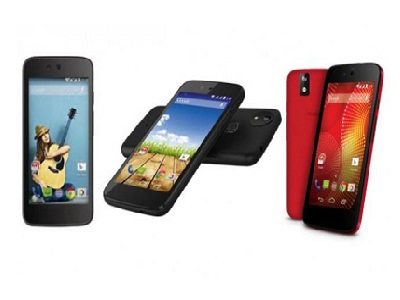 September 16, 2014: Back in June, Google announced its Android One imitative to make the smartphones more accessible to the users. These smartphones were claimed to be priced reasonably around $100 (approx. Rs 6,000) to make them best feature phone upgrades. This concept for primarily focused towards the emerging markets and going by the same, Google held an event in India on Monday to take the wraps off the first wave of Android One offerings.

The first hardware partners of Google for the Android One smartphones areIndiabased manufacturers such as Spice, Karbonn and Micromax and these vendors have released their offerings dubbed Spice Dream UNO, Karbonn Sparkle V and Micromax Canvas A1. The only difference between these smartphones would be their build quality and design choices that are made by the manufactures. Also, their sales figure depends on the after-sales service as that is independent to the vendor and brand reputation.

Detailing on the technical specifications front, the Android One smartphones are all based on the same reference model and they will arrive with similar specifications. These handsets boast of a 4.5 inch FWVGA IPS display and employ a MediaTek MT6582 SoC housing a 1.3 GHz quad-core Cortex A7 processor, Mali 400 MP2 graphics unit and 1 GB of RAM.

There is 4 GB of internal storage capacity of which 2 GB is available for storing applications and expansible storage support up to 32 GB. The imaging hardware including a 5 MP primary camera at their rear with LED flash and HD 720p video recording that is accompanied by a front-facing 2 MP selfie camera. Other goodies onboard include dual SIM functionality, 3G, Wi-Fi, Bluetooth 4.0, GPS and a 1,700 mAh battery.

The Android One smartphones are fueled by Android 4.4.4 KitKat operating system out-of-the-box and they are assured to receive the upcoming Android L update soon after its commercial release along with the existing Nexus devices. Also, Google has claimed that it will provide OS updates to these smartphones for couple of years since their launch.

Google has partnered with Airtel, the leading Indian carrier that is providing its subscribers with Android One smartphones freebies such as OTA updates and 200 MB of app downloads from the Play Store per month for the first six months. This way, users can save their mobile data plan against these activities.

An interesting feature that will be hitting the Indian users is the facility to watch the YouTube videos offline without data or Wi-Fi connectivity. Well, the users can save their favorite videos on YouTube Android app and can watch them later at their convenience. Moreover, the search engine giant will rollout one year of free subscription to the content on Google Play Newsstand.

While India is the first country to receive the Android One smartphones, Google has also partnered with Acer, Alcatel Onetouch, Asus, HTC, Intex, Lava, Lenovo, Panasonic and Xolo and chip maker Qualcomm to launch future offering before this year in Indonesia, Philippines, Bangladesh, Nepal, Pakistan and Sri Lanka. The other regions will be getting the handsets in 2015.

Don’t make the mistake of excluding MARKETING from your social media...