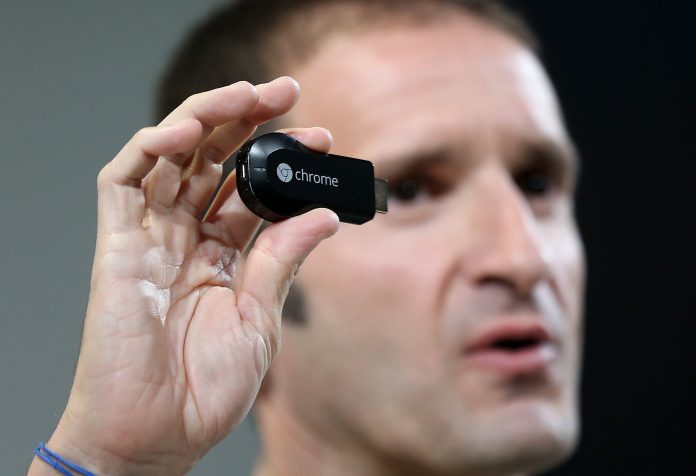 July 29, 2013: Google in a bid to make the access of Internet content on Television easier for users has launched its plug and play device “Chromecast”. A gadget which measures two inch will allow online video streaming and what the users have to do is to just plug this device into the back of the television and they can watch YouTube and NetFlix videos on the go. They can watch these videos on their smartphones even.

Chromecast which is prized at USD 35 roughly measures the size of a thumb drive and can be connected to HDMI port of flat TV’s, tablets, smartphones and PC’s.  Speaking on the occasion of the launch, Mario Queiroz, Head of Google TV said, “ All you have to do is to plug it in to any HDMI nput on a TV, connect to home Wi-Fi and you are ready to kick back and watch.” In what is seen as a major innovation from Google, Chromecast does not clutter the environment cabinet and it will be equipped with a modified version of the Chrome Operating System.

Chromecast is all set to give a major competition to devices from Apple and Roku which are priced at USD 99 and USD 80 respectively. In a bid to woo customers, Google would be offering free Netflix service for three months to the users on the purchase of Chromecast. This would make the price of the device in effect to be USD 11 as the three month subscription of Netflix comes to around USD 24, if valued.

The industry is terming this device as a smart and disruptive device and though it is premature to talk about how Google Chromecast will fare against devices from Apple and Roku, but one thing is for sure that it is definitely going to create a lot of clutter and this time around Google may have got it right.