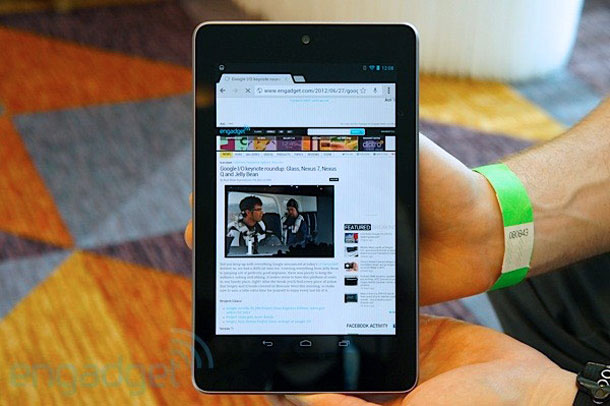 Quick question – what comes after Cupcake, Donut, Éclair, Froyo, Gingerbread, Honeycomb and Ice Cream Sandwich…?  Its Jelly Bean! Yes folks that’s what’s the latest version of Android been dubbed as. On 27th June Google announced this brand new version of the OS with the launch of the Google Nexus 7 tab manufactured by Asus.  Let me tell you, this will be a game changer as far as Tabs are concerned and looks like it’ll give Apple a run for their money!

The biggest asset the Nexus 7 can boast off is the Jelly Bean version of the OS (Android 4.1). So what’s the buzz all about? Now, if you think ICS was smooth, think again! Project Butter for Jelly Bean has made navigational animations smooth butter! Then there is the lock screen interface. The only significant difference from its predecessor is the third icon on the lock screen – Google Voice Search.

The notification centre has seen some great improvements- in fact its revamped! The clock’s redesigned, and so is the date display. The icons look much sharper now! Updates are more interactive now – you can read the complete message, view shared photos or even snooze the next meeting reminder and lots more! And what’s more, Google has introduced a friend for you in the OS and that’s Google NOW. Now you’ll get real time updates on the traffic conditions, weather conditions, your next meeting schedules, flight status – all this and more integrated with Google Voice Search! Now that’s some classy AI in action! Also, now have HD contact photos when your dear ones call you! Google Maps now work in offline mode as well and the keyboard just got smarter!

Well, this was what’s new and inside the tab, now for some details on the Hardware!

Well, so to say, the Nexus 7 gives you a pretty decent hardware but provides great new features with the software. Adding 6,00,000+ Apps in Google Play, this tab will definitely will be the perfect tab given its low price once it enters the Indian Markets sometime in a few months time!

Passionate In Marketing - July 17, 2015
0
The U.S. burger chain Carl’s Jr will be launching its first restaurant in India at the Select Citywalk mall in the country’s capital New...

Meet the Pioneer in MPO in India – CMO Axis

PepsiCo to spend close to Rs.160 crore in next two months...

Elder Pharmaceuticals ties up with Kose Corporation to sell cosmetics in...