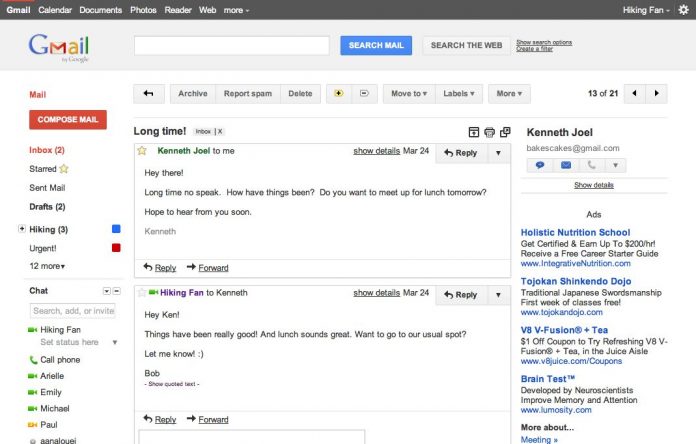 May 12, 2014: If one believes the reports of Geek.com who claims to have screenshots of the new Gmail screen which is under testing, Google is soon to give a new user interface to Gmail. The new interface is said to be for the web version of Gmail. The most popular online webmail service Gmail is said to have removed the new tabs feature and will have more white space.

A screenshot of the new interface revealed by Geek.com shows that the Hangouts chat menu with a drop down list is placed at the top right. There is a new hamburger menu at the left side and there is a big search box in the middle. The other features on the right side of the interface towards bottom are the reminder creation buttons and email buttons that are round shaped.

The new interface which according to reports would be on display in the forthcoming Google I/O event in June also includes a new pin system that replaces starts for flagging important mails. Geek.com also reveals that the new tools would let users store reminders and as well as multiple draft messages which are unfinished.