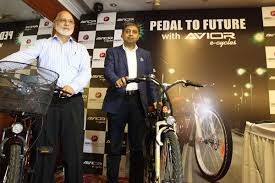 Nov 2, 2014: Hero Electric announced the launch of their flagship product, AVIOR e-cycles and the same will be made available across India. The AVIOR e-cycles make use of 6 speed Shimano Gears and are capable of achieving a maximum speed up to 25 km per hour. The batteries that energize the electric cycles would be providing somewhere between 4.5 hours and 5.5 hours of charge.

The AVIOR e-cycles are especially targeted at the urban lifestyle focusing on young professionals, large corporate networks and the young commuters. The company hopes to sensitize the huge urban population in the metro cities across the country that are adopting to e-cycles as their mode of transportation in order to travel to short distances quickly.

As per the executives of Hero Electric, AVIOR e-cycles introduce the leading German technology inIndia. Interestingly, those riders who do not want to use the battery power can always switch back to the pedal power. It is claimed that this is new offering shows the maker’s commitment to preserve ecology and contribute least to the environmental pollution.

Also, the growing concerns regarding traffic in our country and the issues that commuters are facing in their everyday life is known to all. Cycling is considered tedious owning to road and weather conditions in the country, but there are numerous commuters who have adopted cycling for fitness reasons and the number is increasing gradually. Hero Electric hopes to render an all new cycling experience with more comfort to this set of commuters with its AVIOR e-cycles.

Furthermore, Hero Electric has announced two variants of the AVOIR e-cycle and they are the AVOIR AMX and AVIOR AFX that are priced at Rs 19,290 and Rs 18,990 respectively. These pricing are based on the on-road costs inDelhiand there will be a marginal difference in other cities.

Hero Electric has announced the AVIOR AMX in Black color option and the AVIOR AFX inBurgundycolor variant respectively and they are listed for sale across five metro cities in the country.