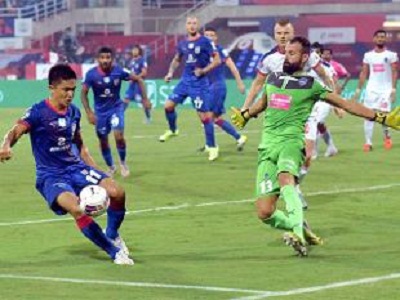 The  Hero ISL Football League Tournament’s second season has witnessed coverage of 40 million in the first week of broadcasting across eight channels. This is an improvement in comparison to the same that took place last year, claim the media planners.

The national director at ESP Properties, Vinit Karnik the viewership this year has been better. Also, the average attendance in the stadiums has been high this year in comparison to the last year. ESP Properties is a sports and entertainment consultancy of Group M, the media management giant. Even the quality of the play has improved this time and there is an increase in the buzz about the league on the social media channels.

The first year, Star TV broadcasted the football tournament and it was watched by around 429 million viewers across the country. This is two and a half times higher than the FIFA World Cup viewership in 2014 in the country.

The drastic increase in the viewership in just a year has helped Mukesh Ambani and Rupert Murdoch promoted league to generate higher interest from the brands this time. The league has 17 sponsors, which is double than that of the last year. The second season of the Indian Super League started earlier this month that is on October 3.

As per the data from the BARC (Broadcast Audience Research Council), the tournament’s strongest ratings are seen on the regional channels. Some of these channels include Asianet Movies, Star Gold and Jaisha Movies. The ratings for the matches watched on the channels Jaisha and Asianet were high all through the first week. As per BARC, the tournament’s coverage was around 30 million on seven channels. Last year, TAM provided the data and now BARC will provide the same.

The broadcaster of the tournament Star stated that the average online live match views have increased by 83 percent for the 15 matches. Even on Facebook, around 5 million users have interacted regarding the same.