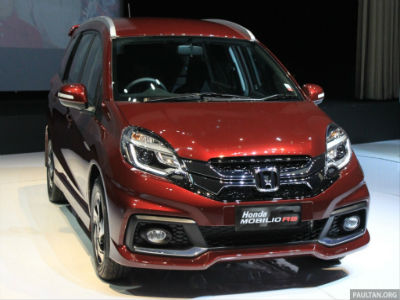 The new grades of Mobilio, V (O) and RS (O) are now available along with the existing lineup including E, S and V variants. When it comes to features, these two additions will include rear view parking camera, 15.7 cm touch screen navigation system with maps, audio and video (AVN) navigation, satellite based voice navigation, AUX, USB and Bluetooth connectivity.

The audio and video navigation system is pretty similar to the other Mobilio models that were launched last month. However, the manufacturer claims that this system has a better resolution. In addition to these features, the V (O) and RS (O) variants boast wood inserts on the armrests and dashboard.

The integrated Bluetooth in the vehicle lets the users to sync their phone with it and use the screen to carry out operations such as dialing, answering, accessing history, music play and address book.

Mechanically, there is no change made to the Mobilio for these new variants. The 119PS petrol and the 100PS diesel engines remain intact. The company has made it clear in its statement that the RS (O) is an exclusive sporty variant available only in diesel and it is claimed to be have a fuel efficiency delivering 24.5 kmpl mileage that is 0.3 kmpl more than the other regular grades.

Talking about the pricing and the availability, the new grades of Mobilio are priced as follows: 1.5L V (O) MT petrol variant at Rs 9.46 lakh, 1.5L V (O) MT diesel variant at Rs 10.45 lakh and the Mobilio RS (O) diesel at Rs 11.55 lakh respectively. All these are the ex-showroom pricing inNew Delhi.

The Mobilio has been accepted largely by the consumers in India and the firm had sold 3,365 units of the multi-purpose vehicle in just one month so far.

Scentra to set up stores in India, plans to enter new...

Tata planning to launch 800 cc Nano and Nano Diesel in...