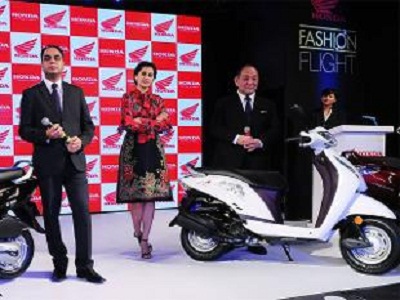 On Wednesday, Honda Motorcycle & Scooter India (HMSI) announced a couple of new edition scooters – Aviator and Activa-i. This move is a part of the starting of the firm’s plan to launch 15 new products in the country this year. With the new launches, Honda has completed eight new two-wheelers in the country in the first six months of 2015.

Indiais a main focus market for Honda as the country is a significant one. The two-wheelers from Honda are the second largest contributors of the manufacturer’s global sales. At present, of one in every four two-wheelers that are sold by Honda across world is fromIndia.

Regarding this, at the launch of the new Aviator and Activa-i, Keita Muramatsu, the President & CEO of Honda Motorcycle & Scooter India stated that he is confident that the firm’s continued investment and growth will helpIndiabecome the largest two-wheeler for Honda on the global scale in the next two to three years.

The firm is all set to establish its fourth plant in the country that will be the world’s largest plant only for scooters. It will start its operation from early 2016 atGujarat.

Also, Yadvinder Singh Guleria, the Senior Vice President, Sales and Marketing of HMSI stated that the present capacity of the existing three plants totals to 4.6 million and that there will be an additional 1.2 million with the addition of the fourth upcoming factory located in Gujarat.

Notably, within two months of the current fiscal year that is April and May 2015, Honda has achieved a market share of 27 percent and it has also gained 3 percent in comparison to the same time frame in the last fiscal year.

Guleria went on stating that the firm has a target volume of 4.67 million for the fiscal year ending March 2016 in comparison to the 4.45 million achieved last year. AQs of now, the firm is doing nearly 60 percent of the total sales volume rendered by scooters.

Besides the launch of the Activa-i and Aviator models, HMSI also announced the actress Taapsee Pannu as its brand ambassador.