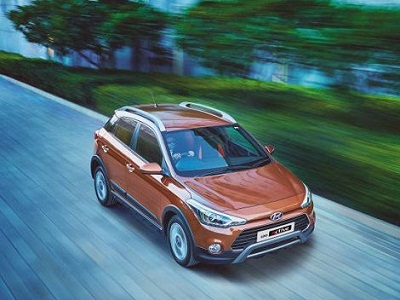 On Tuesday, Hyundai Motor India launched a new sports styled version of i20 Active. This new variant of its premium hatchback model i20 costs up to 8.89 lakh inDelhi.

Hyundai Motors is bullish that the i20 Active will compete with other vehicles in the price bracket between Rs 6.23 lakh and Rs 8.5 lakh such as Toyota Etios Cross, Fiat Avventura and Volkswagon Cross Polo.

Hyundai is eyeing to achieve a sales milestone of 5 lakh units in the domestic market and hence, it is gearing up to get into the last emerging sports utility vehicle market segment to increase the volume.

Hyundai Motors is likely to announce ix25 SUV in the country in the time period of August or September this year so that it hits the market right before the festive season. This way, it will complete with the range of SUVs that have been launched by HMIL in the country.

The i20 Active is aimed to address the lower-end customers who want to own a vehicle with sporty and stylish looks. The firm already sells top notch models such as SUV Santa Fe that is priced up to 29.94 lakh in the country.

Notably, last month, Hyundai Motor India announced the mid-sized Verna in the price bracket between Rs 7.73 lakh and Rs 12.19 lakh. It is to have undergone intense testing to suit the conditions of the Indian roads. The latest versions of Verna are claimed to be design with a rear shock absorber with low velocity control valves ensuring a smooth ride even on bumpy roads at high speeds.

Betty Sebastian - December 3, 2021
0
Camera Marketing is an emerging tech-marketing technique in the world of digital and social media marketing. It will soon develop as one...