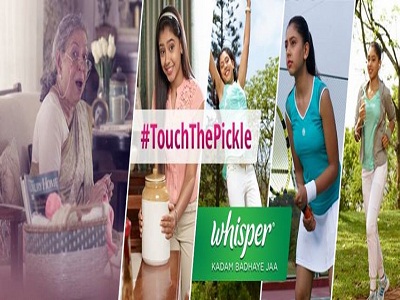 India has bagged its very first Grand Prix in six years with BBDO grabbing the top honors in the Glass Lion category that is launched newly. This category has received the honors for its ‘Touch the Pickle’ campaign for Whisper sanitary napkins.

The agency’s ‘Share The Load’ campaign for the detergent Ariel also has bagged a trophy in the same Glass Lion category at the 62nd Cannes Lions International Festival of Creativity. This category focuses on work that explicitly or implicitly addresses the issues of gender inequality or prejudice.

The ‘Share The Load’ campaign for Ariel started a debate on how laundry was not only a woman’s task. On the other hand, ‘Touch the Pickle’ aimed on breaking the traditional and modern taboos imposed on a woman during her menstrual cycle. The yesteryear Grand Prix winner was the Lead India for The Times of India. The same campaign also won in the year 2008.

The top management of BBDO India gave the festival a miss and it was not there to collect the trophy as it is a rarity talking about Grand Prix. The win has elated the Indian group atCannes.

There are several speculations of how the commercial made it to this level.co-CEO and Creative Director at Almap/BBDO Brazil, Marcello Serpa stated that the category is not about craft.

Worldgroup won a couple of Silver Lions for its Dish TV campaign and Creative Asia grabbed one silver metal for Reckitt Benckiser campaign. This category yielded a Bronze gong each to DDB Mudra, Ogilvy & Mather and Grey for their work on Volkswagen, Puffin and DHL respectively.

In Media Lions, the agency BBDO grabbed a bronze for ‘Touch the Pickle’ campaign and Kan Khajura Tesan from Hindustan Unilever won a bronze in Creative Effectiveness category.

Indiafailed to make its first cut in Cyber, Radio and Product Design categories., The agencies had very big expectations of grabbing a few Lions in Radio, but they were disappointed.

Author - January 19, 2022
0
With realigned strategies, progressive tactics, and a tech-first approach, the hospitality area is already making a return The pandemic’s...