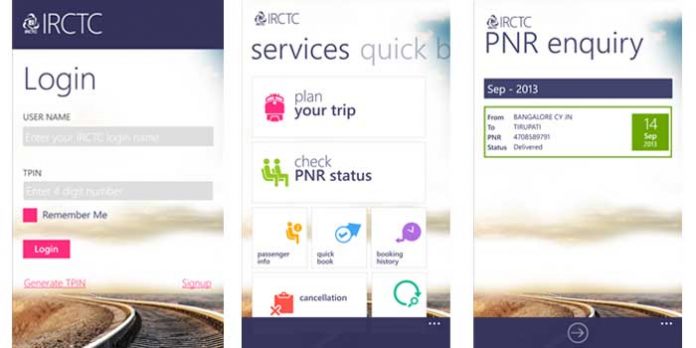 August 13, 2013: Indian Railway Catering and Tourism Corporation (IRCTC) launched a new application in collaboration with Microsoft which would help the users to book e-tickets in addition to the existing IRCTC portal. The new IRCTC App which could be used by users who exclusive use Window devices would work on Windows Phone or Windows 8 Devices. railway reservations, check PNR status and plan a trip. Speaking about the launch of the new app, Rakesh Tandon, CMD, IRCTC said “With this alternative channel of booking, the passengers will have an additional convenience and better experience of booking e-ticket.”

Joseph Landes, GM, Microsoft Corporation on the occasion of the launch was quoted as saying, “We are excited to make the IRCTC app available exclusively on the Windows platform. We are committed to bring exciting and new experience to your Windows devices and will continue to create many such firsts.”

Though this app is being introduced to make the ticket bookings easier for the customers, this service will not be available from 8 a.m. to 12 noon and 11:30 pm. to 12:30 a.m. IRCTC recently have been trying different models to bring down the congestion on its portal and this move by IRCTC is seen by experts as a move in the right direction. The users would now be eagerly waiting for an Android version of the IRCTC App as well after the launch of this app which is supported on Windows.

Passionate In Marketing - November 15, 2014
0
The search engine giant Google has roped in around 300 online and offline retailers and consumer firms for its Great Online Shopping Festival this...

Xiaomi Made in India phone to be launched today

Domino Pizza’s prices to go up

Car sales plummet by 25.7 per cent in February, biggest slide...

Things to consider for Marketing Budget 2013