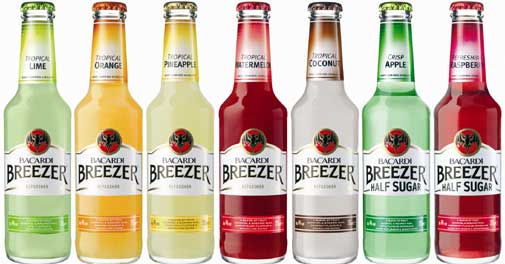 June 27, 2014: After McDonald and Lays, now it is turn of global brand Bacardi to try out Indianized flavors in their low alcohol ready to drink  brand ‘Breezer’. It has close to $2 million annual sales in India, but the company wishes to rapidly scale up its sales adding two popular Indian flavors of Nimbu Paani and Aam Panna to this low alcohol drink.

This has made Bacardi as the first spirits company to try Indian tastes to create a much bigger segment for rum based drinks. India is a dominant whisky nation and this move from Bacardi could migrate many of the users to their rum based Breezer brand. This would mean them deviating their globally well known flavors like cranberry, island pineapple, blackberry crush, Jamaican passion,  etc. “We hope Breezer Indi Mix flavours tap into consumer experience and memories” said Vijay Subramaniam, MD (India & Southeast Asia), Bacardi India Private Limited.

The company has a staggering 97% of market share in the Indian ready to drink rum drink segment. The new Indianized flavored Breezer will be initially made available in states of Haryana, Maharashtra, Goa, West Bengal, and Karnataka. It will be made available across India gradually.

Passionate In Marketing - September 21, 2012
0
Like the 7 P’s of traditional marketing, there are 7 C’s of e-marketing. These 7 C’s are the fundamental aspects to understand the complexities...

Vivo smartphone brand gets title sponsorship for the IPL