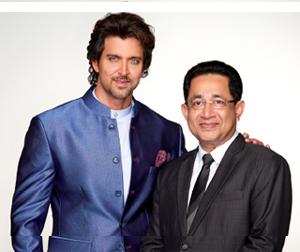 October 9, 2013: Joyalukkas Group which had its humble beginning from Kerala has gone on to become a multi billion dollar global conglomerate 25 years since inception. The company which has retail stores in 10 countries and plans to open 20 more by the end of 2014 as part of its strategy of “Be Global, Touch Local”, has signed Hrithik Roshan as its new brand ambassador.

Joy Alukkas, Chairman & MD, Joyalukkas Group was quoted as saying, “The reach of Indian cinema has gone beyond just an Indian audience, its attracts audiences from across the world regardless of nationality. For Joyalukkas, the decision to sign on HrithikRoshan was strategic due to the global recognition he has received over the years as a symbol of Indian cinema and a Fashion Icon. The hard work and dedication that Hrithik brings to all his endeavors, is synonymous to the foundation upon which the Joyalukkas brand has been built.”

This paves the way for Joyalukkas to carry on its expansion plans and showcase the brand at a global level. The Jewellery major recently has been on a signing spree and has recently signed actors like Allu Arjun, Sudeep, Suresh Gopi and R Madhavan based on their reach in southern part of India.

Passionate In Marketing - October 28, 2020
0
Yes Bank has outlined a plan to close its non-performing branches and ATMs. They have also planned to narrow the office space...