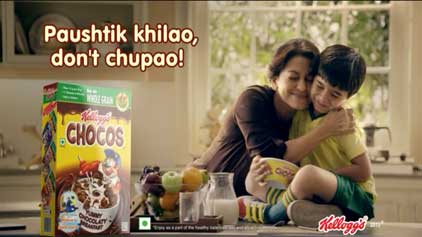 Feb 26, 2013: What is Juhi Chawla does very few movies in a year but that does not stop her from endorsing various brands. Such is the star power of her. Juhi Chawla is the new face of Kellogg’s Chocos and she will be endorsing the popular kid’s cereal brand. She will be staring in the new campaign being rolled out by Kellogg’s Chocos. Kellogg’s which is famous for its breakfast cereals is immensely popular among kids for its Chocos.

Kellogg’s Chocos is made up of whole grains and is a good substitute for mothers who struggle for breakfast options. Kellogg’s is going to roll out a campaign with the tagline “Paushtik Khilao, don’t chhupao”with Juhi Chawla whom they feel personifies Kellogg’s Chocos mother. Kellogg’s Chocos is said to provide many roti like qualities for kids and is already a hit among the kids. Earlier Karisma Kapoor has been endorsing the brand and the company used to have a tagline “School ke liye ek badiya shuruat”.