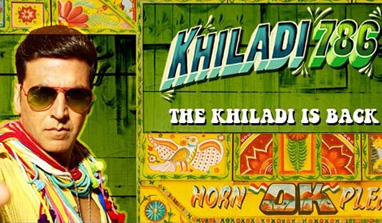 Dec 11, 2012: Akshay Kumar back in his Khiladi avatar with Khiladi 786 got released this Friday. Khiladi 786 one of the most anticipated movies this year has joined the unique club of UFO movies i.e. Millennium Club.  UFO which has been offering Digital Cinema Solution has revolutionized the film distribution and exhibition system with its unique pay per show business model.The new big budget movie was released in as many as 1111 UFO digital theatres and joined the Millennium Club as other films like Bol Bachchan, Don 2, Ra-One, Ready, Singham and Bodyguard which were screened in over 1000 UFO digital theatres in the first week.

Khiladi 786 which was released in 2,786 theatres across India and registered 90% occupancy in single screens nd 60% occupancy in multiplexes has already raked in Rs.34.30 crores from domestic business in three days.

Passionate In Marketing - March 31, 2013
0
The promising launch of the sedan class car on April 11, Honda Amaze is inching closer and it brings in both excitement and rivalry....

Nissan India Plans to Launch Datsun Go+ in First Half of...

Honda Motor starts work on developing a small car and a...

Online Video Marketing to be one of the Top Marketing Trends...