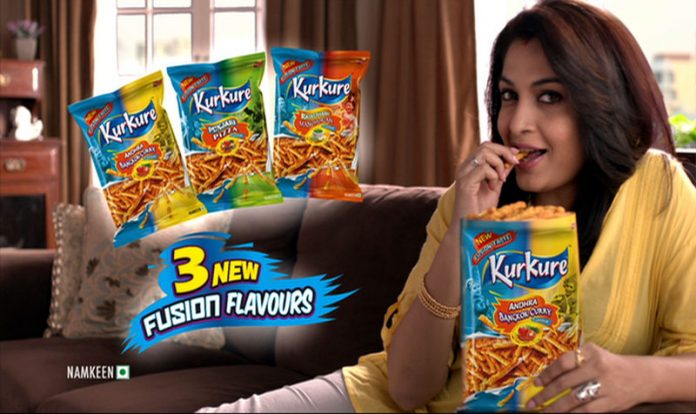 Feb 22, 2013: Kurkure which recently introduced its new family to the audience  has launched its new fusion flavours which are named after international cuisines but has got a Desi Kurkure twist. The new fusion flavours introduced under the Kurkure brand are Punjabi Pizza, Andhra Bangkok Curry and Rajasthani Manchurian. Kurkure family will be unfolding a new saga woven around these three new flavours carrying on from the earlier advertisements where they planned a small party with the Super Saver Pack. Three new TVCs which have been designed by JWT will be aired starting from February 22nd onwards communicating about these three new ‘Desi Flavors’.

The first TVC will have Parineeti Chopra and Farida Jalal offering Punjabi Pizza to Omi Vaidya. The second TVC will have Ramya Krishnan remembering about Andhra Bangkok Curry and Boman Irani also is featured in this ad. The third TVC will have Parineeti Chopra and Kunal Kapoor eating Rajasthani Manchurian and planning a vacation. According to Mr. Nalin Sood, Executive Vice President-Foods, PepsiCo India, “Kurkure is a perfect combination of modern outlook with tradition twist and the same is reflected in its campaigns as well as innovative product offerings. The new fusion flavours too bring alive the same philosophy and offer consumers a great combination of regional cuisines and international taste.”

Kurkure which has always been known for its marketing innovation and innovative TVC’s is trying to break the clutter in the snacks business and taking the competition at a different altogether through these innovative variations.

Passionate In Marketing - July 1, 2020
0
In this coronavirus pandemic, films all across the nation and most parts of the world are closed. Disney+ Hot star has declared...