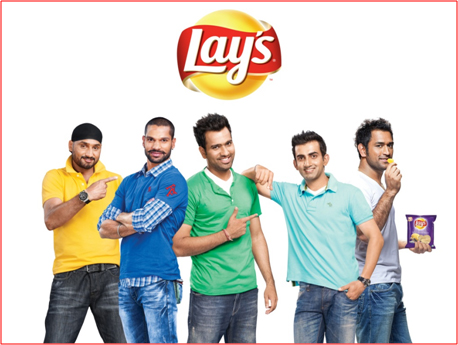 April 27, 2013: You might have watched the teaser ad from Lay’s which shows cricketers Harbhajan Singh, Rohit Sharma, Shikhar Dhawan, Gautham Gambhir and Indian Skipper MS Dhoni joining a new team. The ad shows a man showing them signs and these people running to get into a Hummer. The second half of the ad has gone on air and Lay’s in this ad shows these players joining the new ‘flavour’ team. Lay’s has launched six international flavours, Classic Salted, India’s Magic Masala, West Indies Hot ‘n’ Sweet Chilli, American Style Cream and Onion. It includes the recently launched Lay’s Chile Limon and French Salt & Cracked Pepper.

The new campaign which it launched during this IPL season is based on the theme that people give in to irresistible offers.  The emphasis on the whole campaign is that the new flavours are available for Rs.5.  The ad is actually misdirection around the players and shows them joining a team for Rs.5. About the association of Lay’s with cricket, Vidur Vyas, Marketing Director-Foods, PepsiCo India was quoted saying that “Cricket is a passion in India and Lay’s has always tapped this passion by creating moments that consumers can enjoy with friends while watching the game. With this new campaign also, we plan to take this engagement to a new platform by building intrigue and adding crunch to the exciting cricket season ahead.”

The new campaign is surely going to create some ripples in the snacks market especially because of its emphasis on the price point of Rs.5.