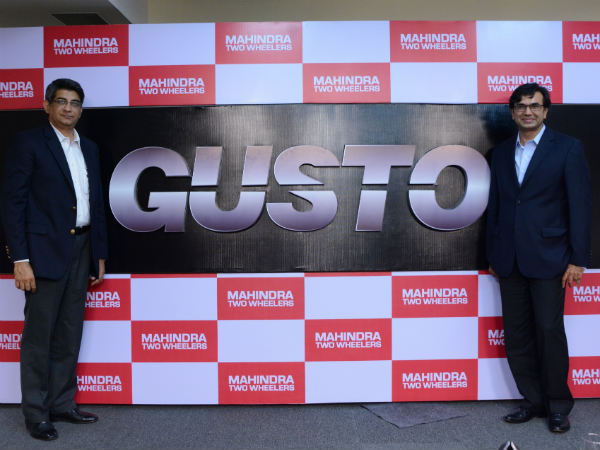 India based auto maker, Mahindra & Mahindra was in the headlines for the launch of the new Scorpio on Friday. So soon, the manufacturer has announced its plans to announce a new scooter in the domestic market. The new scooter dubbed Gusto will be launched on initially in the Northern and Western parts ofIndiaandNepalon September 29 and followed by other markets includingSouth Asia, Africa Central America later.

Detailing about the Gusto, Mahindra & Mahindra Chief Executive – Farm Equipment & Two Wheeler Division & Member of the Group Executive Board, Rajesh Jejurikar revealed that the Gusto is a 110 cc scooter. He added that the other details regarding the scooter will be revealed when the product will be launched officially next week. Also, the firm believes that this new scooter will create a distinct proposition for the brand among its consumers.

Mahindra & Mahindra is launching this vehicle in an attempt to take on the dominant player in the scooter market, Honda Activa. The executive claimed that the upcoming Gusto is a good product that can not only compete with Activa but the other established models as well. The scooter is claimed to feature a contemporary and distinctive styling originating inItalyand has been conceptualized using extensive research and numerous consumer insights.

Mahindra & Mahindra has developed the Gusto to be a global scooter using the firm’s R&D unit established in Pune. Furthermore, this new scooter is the first product to be developed independently by theIndiabased firm after the acquisition of Kinetic six years back.

As of now, Mahindra & Mahindra has not shared any information pertaining to the technical details of the Gusto, but it is claimed that it will feature an aluminum M-TEC engine that packs advanced features including high energy HT ignition coil, stronger crankshaft and bearings and a series of regulators to render outstanding reliability, efficiency and power.

Passionate In Marketing - October 9, 2014
0
Lenovo that has been launching numerous power efficient smartphone in market has announced an entry-level handset called Lenovo A328 on Wednesday. The handset is...

Honda Cars gets the distinction of the most fuel efficient cars...