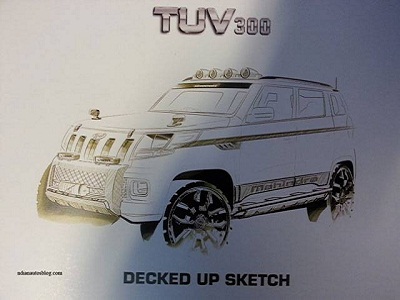 To add another challenger to the Sports Utility Vehicle (SUV) market segment, India based Mahindra & Mahindra is coming up with SUV called TUV300. Confirmed to be in the works, the TUV300 is pegged to go official in September this year. The sub-4m SUV’s nomenclature TUV stands for Tough Utility Vehicle.

Talking of the TUV300, the Executive Director and President of Automotive and Farm Equipment sectors at Mahindra & Mahindra, Pawan Goenka stated that the TUV300 is a new platform in its body and interiors. It belongs to the Sub-4 meta segment, he added. He further revealed that the TUV300 is not designed with the intention to be a crossover. It is claimed to be a true blue SUV with traditional style of Mahindra.

The executive went on stating that the TUV300 is not a replacement to the company’s Bolero or other offerings. Goenka stated that the company likes to ensure that this SUV will come packed with all the features that the users require to see in the new segment of automobiles.

Mahindra has sought the help of the Italian design house Pininfarina in order to design the TUV300. Powering this new model is a new generation diesel engine that is called mHawk80 by Mahindra. This engine is turbo charged and it has superior NVH levels and performance than the existing 1.5 litre engine that is used on the Quanto.

The TUV’s platform is ready for a 4WD system that the manufacturer will not provide at the time of launch. It will be a global product and will feature a LHD version, confirmed Mahindra. The vehicle was developed at the manufacturer’s Mahindra Research Valley located in Chennai and it will be made at the Chakan plant that is involved in the manufacturing of the XUV500 as of now.

As per the executive, the firm is prepping a series of clutch-less variants as well in order to cash in on the increasing demand in the country’s urban regions. The AMT (Automated Manual Transmission) is a clutch-less technology that is fuel efficient than the manual transmission models. It is also as comfortable as the automatic variant without much increase in the cost.

Mahindra has come up with the TUV300’s announcement soon after the unveiling of the Creta SUV by Hyundai. Also, Honda is planning to introduce a SUV in India and it has carried out a study of the market conditions in the country.

Xiaomi Redmi Note Sale to Commence on December 2 via Flipkart

Passionate In Marketing - December 1, 2014
0
Chinese manufacturer Xiaomi that is considered the Apple of China announced the Redmi Note phablet in India early this week. The device was launched...

Microsoft makes a push into Internet “cloud”, partners with Salesforce.com

Eveready releases new ‘Give me Red’ campaign with Akshay Kumar

Decoding the ad of “New Figo”