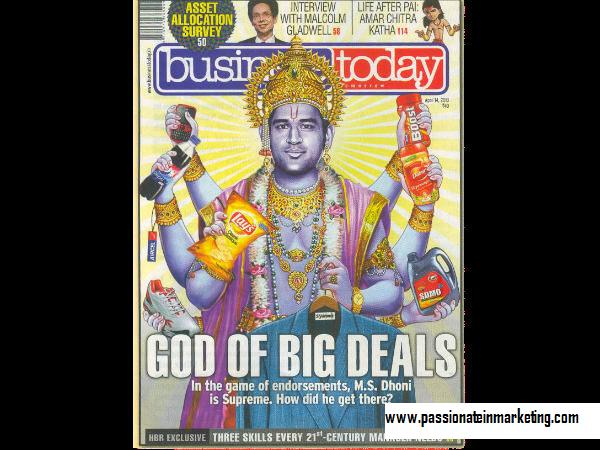 Mahendra Singh Dhoni has been one of the most successful captains that Indian Cricket has ever witnessed and this has not only resulted in increasing his popularity but also making him sign a lot of brand endorsement deals. Dhoni is currently endorsing close to 15 brands in the market and a study says, the brand value of the young cricketer is something equal to the legendary Tiger Woods. He had recently hit the big league by signing a Rs.210 crore ad deal with Rhiti Sports Management Private Ltd. The Indian captain who currently endorses more than 15 brands like Ashok Leyland, PepsiCo, Aircel etc. has got into a controversy.

The controversy surrounding the captain is about him being featured on the covers of Business Today as Lord Vishnu holding different branded products in his hand. A lot of questions are being raised about Ethics in Marketing and whether this was a right move by the magazine to publish such a cover photo. A case has been filed against Mahendra Singh Dhoni for hurting the religious sentiments of the Hindus under section 295 (injuring or defiling place of worship with intent to insult the religion of any class) along with 34 of the Indian Penal Code). The case was registered after a complaint was filed by a social activist, Jayakumar Hiremath.

The controversy comes close on the heels of the infamous Ford Figo’s unapproved ad surfacing on the social media. Quite a furore was created in the media circles because of this ad and couple of heads rolled in JWT the agency handling the account of Ford Figo. A section of people believe that Dhoni has hurt the sentiments of Hindus as in that image he is seen holding a shoe as well, but there are some who believe that it’s the agency and the magazine which has to be blamed. It is yet to be ascertained if Dhoni had given his go ahead on this depiction of Lord Vishnu.

What is disheartening to note in the events leading to such controversies whether it is Mahendra Singh Dhoni’s act of being depicted as Lord Vishnu or ad of Ford Figo is can these ads be passed off citing it as creativity. The questions that would definitely continue to be raised are can creative liberty be taken by hurting the sentiments of people and to what extent the media agencies should take the liberty.  Advertising is definitely about being creative but at what cost is the question.

Passionate In Marketing - December 2, 2020
0
Singapore's DBS Group had said that they had finished the takeover of cash-strapped Lakshmi Vilas Bank. This move will help them to achieve a shift...

The 13th edition IPL viewership is over 28% higher than the...