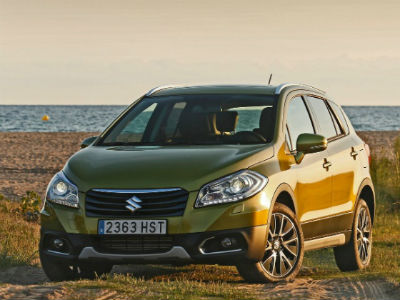 August 7, 2014: Maruti Suzuki India appears to be geared up to unleash a new lineup of cars in the market early next year. In order to tap the sub-compact and compact SUV arena, the firm is planning to launch the Maruti Suzuki S-Cross in both petrol and diesel versions.

The much anticipated S-Cross is pegged to arrive inIndiain the end of January 2015 and is believed to cater to the demands of the lucrative market. Following this, Maruti is also claimed to launch the XA Alpha mini-SUV by the end of 2015. Interestingly, the S-Cross will be made available in a petrol variant and a diesel model with alternative fuel options in the pipeline.

Though it is not a typical SUV, the S-Cross does utilize an SUV-esque style with plastic claddings and bold proportions. It also features a sporty front guard that is clubbed with a bumper cladding at its rear helping it to accentuate great levels of ground clearance.

When it comes to the interiors, the S-Cross has a spacious cabin with the capacity to seat five persons with generous boot space. Other interior designs are similar to what is seen in the existing Maruti lineup with black and grey highlights and brushed metal accents.

It has to be noted that the S-Cross based on the Suzuki S4 platform has already been made available in the western markets since quite sometime with moderate success. InEurope, the S-Cross has 1.6 litre 4 cylinder petrol engine that delivers 120PS peak power and 156Nm peak torque. While, the other model has a 1.6 litre diesel engine delivering similar peak power and 320Nm peak torque respectively. The petrol variant has a 5-speed gearbox, whereas the diesel one has a 6-speed gearbox. However, inIndiathe S-Cross is expected come with a 1.4 litre petrol engine and a 1.3 litre diesel engine that take charge in the Ertiga.

Maruti Suzuki S-Cross is doubted to arrive with the optional four-wheel-drive system and four driving models inIndiaas the market is price sensitive. Consequently, we expect the two-wheel-drive system with the advanced ones to arrive later in high-end variants depending on the momentum of sales.

Acclaimed to be the first crossover inIndia, the Maruti Suzuki S-Cross is believed to be priced below Rs 10 lakh and to be a stiff challenger to Renault Duster and Ford Ecosport.