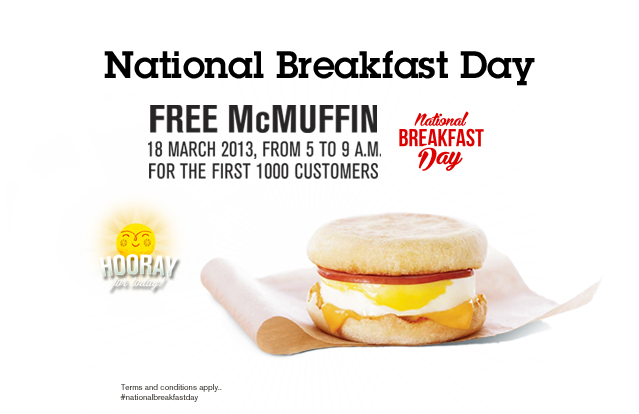 Campaign is one of the biggest breakfast activation promotion campaign run by any company and McDonald’s ran this campaign in over 34 countries. 5000 McDonald’s restaurants participated in the campaign. This campaign was run to make the people understand about the importance of having breakfast and to popularise eating out the first meal of the day.

Eating out the first meal of the day though is very popular globally, but in India it is still at a very nascent stage. National Restaurant Association of India has come out with a report which says that the number of people eating out is slowly increasing and the number of consumers eating out at least once every three months stands at 50 per cent.

McDonald’s which has about 300 stores is trying to tap on to this phenomenon and looking forward for people on the move. According to Vikram Bakshi, Managing Director, Northern and Eastern Region, McDonald’s India, “Consumers are eating out nearly six to seven times a month as per our research as lifestyles are changing. There is a huge opportunity for us as we are targeting people on the move”.

McDonald’s which growing at 125 per cent has got some very aggressive plans for Indian market and is planning to add 30 odd stores where it is not present. Recently McDonald’s opened its first outlet in Kerala in Lulu Shopping Mall, Kochi.

Premium Makaibari Tea of Darjeeling to go on sale in Dubai

After coffee lounges get ready for tea lounges from Wagh Bakri...