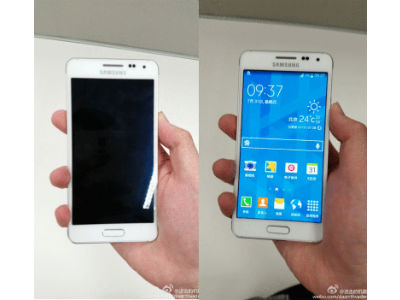 August 5, 2013: World’s leading smartphone manufacturer Samsung is gossiped heavily off-late as it is all set to launch the metal clad Galaxy Alpha smartphone in the next week. While the device has been leaked numerously, the recent image leak suggests that it will be reminiscent to the Apple iPhone, its direct competitor.

Last week, the leaked images of a black variant of the alleged Galaxy Alpha device showed the aluminum trim of the handset. Now, the existence of a white colored variant of the same is tipped as the images of the device in white have been leaked on Chinese social network Weibo. From the same, it is clear that the Galaxy Alpha bears a striking similarity to the iPhone 5s.

So long, Samsung has heavily criticized for outfitting its offerings with polycarbonate plastic with some metal accents. The same was followed for all ranges of devices including the top-tier models that were selling at hefty price tags starting from $500. However, the South Korean tech giant did continue the same and was claiming that the plastic casing paves way for a quick and efficient manufacturing process letting it to achieve a massive sales volume.

Lately, Samsung has witnessed a slump in its smartphone sales that is believed to have driven the vendor to come up with the metallic Galaxy Alpha. Also, Samsung’s Kim Hyun-joon detailed that the firm will be releasing several mid-range and low-end smartphones that include enhanced specifications later this year. And, the metal clad Galaxy Alpha to launch soon is expected to be one of them.

The yet to be announced device appears to be smaller and seems to arrive with a squarish design than the current flagship smartphone, Galaxy S5. Otherwise, the Galaxy Alpha is speculated to feature a low resolution display measuring 4.8 inches while that of the upcoming iPhone 6 is tipped to be 4.7 inches. Also, it is claimed to arrive with 32 GB of internal storage space and equip the Exynos 5433 processor with eight cores that is said to be marginally faster than Snapdragon 805 as per leaked benchmarks.

This processor is expected to be paired with a 2 GB of RAM. Running on Android 4.4.4 KitKat, the device is likely to feature a 12 MP primary snapper, a front-facing 2 MP camera and a heart rate sensor like the Galaxy S5.

Anyways, the Samsung Galaxy Alpha is pegged for an August 13 launch date and reported indicate that it will be debut on sale initially inSouth Korea.