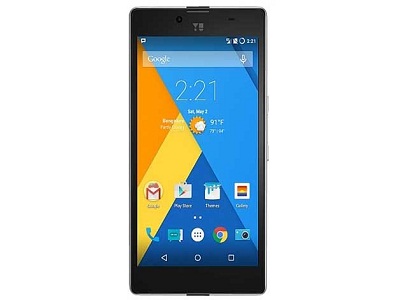 Micromax’s subsidiary Yu has announced the launch of a new smartphone called Yu Yuphoria that is the sequel to the Yu Yureka. The new offering is priced at Rs 6,999 and it runs on Cyanogen OS 12 based on Android Lollipop.

The Yu Yuphoria flaunts a 5 inch IPS display with HD screen resolution of 1280×720 pixels and it is protected with Corning Gorilla Glass 3 coating. The device has a metal body and it has an anti-fingerprint coating. Though it is available at an entry level pricing, the Yu Yuphoria has a better grip and feel that makes it render a flagship like experience.

Measuring 8.25 mm in thickness and weighing in at 143 grams, the Yu Yuphoria smartphone is powered by a 64 bit quad core Qualcomm Snapdragon 410 processor backed by 2 GB of RAM for multitasking and 16 GB of native storage space.

The Yu Yuphoria is a dual SIM smartphone that supports 4G LTE, Wi-Fi, Bluetooth and other common connectivity aspects. On the imaging front, the Yu smartphone boasts of an 8 MP main snapper at its back with LED flash, f/2.2 aperture, OmniVision sensor and FHD 1080p video recording. Up front, there is a 5 MP front facing selfie shooter with 86 degree wide angle lens and f/2.0 aperture.

The entire package of the Yu Yuphoria is powered by a 2,230 mAh battery that supports Quick Charge feature. It is claimed that this feature will let the phone get charged up to 65 percent in 45 minutes.

When it comes to software aspects, the Yu Yuphoria that runs on Cynaogen OS 12 based on Android Lollipop is packed with an application that lets users to customize the look and feel of the smartphone. Also, there is support for Truecaller integrated dialer application.

It has been announced that the Yu Yuphoria smartphone will be designed by the brand and assembled inIndia. The first few batches of the device will arrive from the factories. It has been launched in two color variants – Buffed Black and Champagne Gold.

The Yu Yuphoria will be exclusively available via AmazonIndiaonline portal and the first flash sale will debut on May 28. The registrations of the first sale have already commenced.

Passionate In Marketing - June 30, 2020
0
Shortly after HUL decides to ditch ‘fair’ from Fair and Lovely, Shaadi.com which is one of the leading matrimonial sites announced that it would be removing skin tone...