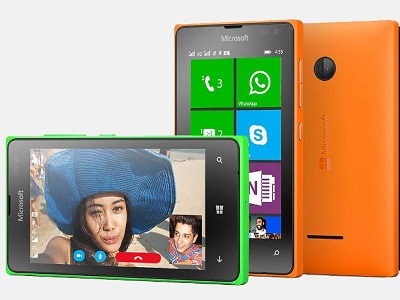 Microsoft has announced the launch of its most affordable Lumia smartphone in the Indian market for a pricing of Rs 5,999. This new offering is listed on the vendor’s official online store and it is the dual SIM model that has been released. The Lumia 435 was launched alongside Lumia 532 smartphone in January.

The handset arrives with a 4 inch WVGA LCD display that carries a WVGA screen resolution of 480×800 pixels. Under its hood, there is a quad core Qualcomm Snapdragon 200 processor ticking at 1.2 GHz clock speed. This processor is backed by 1 GB of RAM and 8 GB of native storage space that can be expanded further by another 128 GB using a micro SD card.

The Lumia 435 comes with a basic imaging hardware that comprises of a 2 MP fixed focus main camera snapper and a VGA selfie shooter up front for basic video conferencing. the handset is preinstalled with the Lumia Camera and Selfie applications for an enhanced user experience. The other aspects of the device include connectivity aspects such as 3G, Wi-Fi, Bluetooth and dual SIM and a 1,560 mAh battery powers it from within providing up to 12 hours of talk time and 504 hours of standby time respectively.

Running on Windows Phone 8.1 alongside Lumia Denim, the Lumia 435 comes packed with a slew of Microsoft services such as Microsoft Office Suite, Outlook, up to 30 GB of OneDrive cloud storage space, Skype and more. Also, the handset is packed with Here Maps to meet the location and navigation requirements of the users.

Apart from specifications, the Lumia 435 comes with bundled freebies from leading teleco Airtel. The service provider offers free 500 MB of 2G or 3G data per month for the first two months.

While the Lumia 435 has been announced by Microsoft in numerous color options, the official website of the vendor inIndiahas listed only the Black and White models of the device. The listing claims that the shipping of the units will happen in four days.