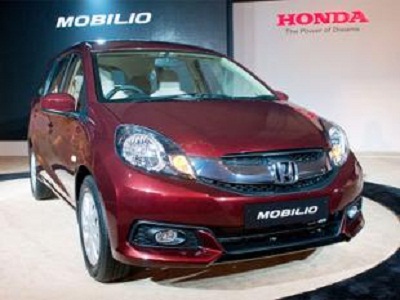 Honda announced the launch of its utility vehicle Mobilio lately and within a month’s time this vehicle has managed to acquire the second position in the market. Well, the Honda offering has outshined other utility vehicles in the market including the best selling Toyota Innova and Maruti Suzuki Ertiga respectively.

In a recent report with the data from Society of Indian Automobile Manufacturers, Honda has sold over 5,539 units of its multi-purpose seven seater vehicle, Mobilio in August. The data indicates that the newly launched Mobilio is gradually tapping into the market share of similar offerings such as Innova and Ertiga and even that of Ford’s compact sport utility vehicle, EcoSport. As of now, the Ford offering is still intact in its fourth position and Ertiga has come down to the fifth sport. However, the Mahindra & Mahindra’s Bolero witnesses a strong demand amongst the consumers and is in the leading position. The vehicle has surpassed the competition for many years and is preferred by both urban and semi-urban consumers.

On the other hand, the Mahindra Scorpio that is another best selling vehicle slipped from the fifth position to the eighth spot in August as the consumers who eagerly awaiting the new variant of Scorpio that was launched last week.

Commenting regarding this success, Jnaneswar Sen, Senior Vice President for Marketing and Sales at Honda Cars India said that the response to the Honda Mobilio has been very good since its launch and that the firm was confident about the vehicle’s success. The executive also assured that the auto maker will be expanding its multi-purpose vehicle segment inIndiafurther.

According to the industry experts, Mobilio has an edge over Ertiga with improved drive quality and space. Another factor favoring the Honda vehicle is the reputation of the firm. While Ertiga is considered by the commercial buyers, the Mobilio is suitable even for personal use. In addition, the initial data from the firm revealed that around 42 percent of the Mobilio customers were from joint families and this contributed to the personal usage of the vehicle.

Passionate In Marketing - December 12, 2015
0
The palace commercial for the chewing gum Happydent that was created by Prasoon Joshi has been named one among the 20 best advertisements of...

Honda Cars gets the distinction of the most fuel efficient cars...

Do we need a Code of Ethics in Content Marketing?

My Mobile Payments in UK

Frooti revamping its image with the Badshah of Bollywood

Amma Brand, the Mother of all Brands

Decline in Sales, Godrej Consumer Products not to focus much on...