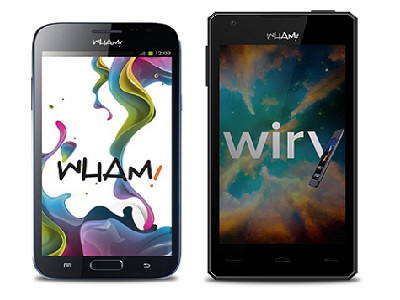 Mobiliya, an AgreeYa Mobility firm announced a partnership with Wham! Mobiles, which is an emerging dominator involved in the delivery of cost effective and innovative gadgets such as feature phones, smartphones and tablets. This partnership is to launch modern smartphones in the Indian market.

All the devices will use a dual-core processor of unspecified chipset ticking at 1.2 GHz clock speed and bundle mere 4 GB of internal storage that should be expandable to let users store more content. Also, it is claimed that the smartphones launched under this partnership will boast long battery life and flaunt either 4 inch or 5 inch AMOLED displays with a resolution of 640×360 pixels and use IPS and OGS screen technologies that will render better viewing angles and responsiveness.

The smartphones that have been launched by Mobiliya and Wham! Devices include Wiry W1, WK41, WD38 and WK44. These Wham! Devices come equipped with 5 MP fixed focus primary snappers at their back. Running on the latest iteration of Android, these smartphones come packed with usual set of connectivity features including 3G, Wi-Fi, Bluetooth and GPS.

These newly announced smartphones will come packed with some exclusive features such as parental control, anti theft protection, location tracking and child mode to mention a few. Anti theft is a safety feature that enables location and control lost or stolen devices and allows users to access the device, retrieve information and lock or wipe the device. Child Mode enables free, fun and safe browsing for children as it is child proof with child friendly controls. Map Me is a geo location application that tracks the location of the user’s loved ones and Picture It is a single and multiplayer puzzle game to challenge friends on the go.

It is claimed by the firm that these Wham! Smartphones have been designed to address the emerging demands of the price conscious consumer base who are looking to own affordable yet functional smartphnes. The Wiry W1, WK41, WD38 and WK44 are slated to be made available via all the leading retail channels across the country.