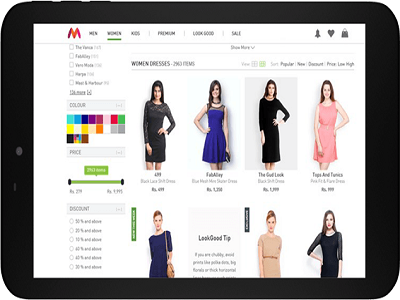 The e-commerce giant Flipkart’s fashion store Myntra has relaunched its mobile website after a period of eight months. This move is done following the footsteps of Flipkart, its parent site that re-started the mobile site in November. Users can access select product categories such as shirts, t-shirts, and sarees among the rest on the mobile site of Myntra. However, the purchase of the products can be done only via the application.

Earlier, Myntra shut down both the desktop and mobile sites in order to move to an application only model. It kickstarted a chief debate among the Indian start-ups on if they must also ditch their websites for the mobile applications. The decision was taken by Myntra as almost 90 percent of the traffic as well as 70 percent of the business of the fashion portal was coming from the mobile phones. These detailed were till April this year, stated Shamik Sharma, the CTO of Myntra.

He stated that it is not about the money, but the realization that if they do not build a mobile only product, then someone else might build it. Whoever creates such a product, will be the winner, he added. Flipkart was likely to follow suit, but the etailer lately seems to have changed its decision and relaunched its mobile site that is called Flipkart Lite. This website gives the users an application like experience on the mobile browsers.

With the Flipkart Lite mobile site, the etailer is aiming to entice more users though it works on the latest versions of Opera and Chrome mobile browsers for now. This is because the native apps that give a personalized user experience also come with specific limitations.

For instance, the applications occupy more space on the device. In India, the phones have very limited space, and so users might tend to uninstall the applications that they do not use frequently.

Passionate In Marketing - June 3, 2020
0
We all know, now we are facing a onslaught from a pandemic virus. The out break of COVID-19 has created great impacts...